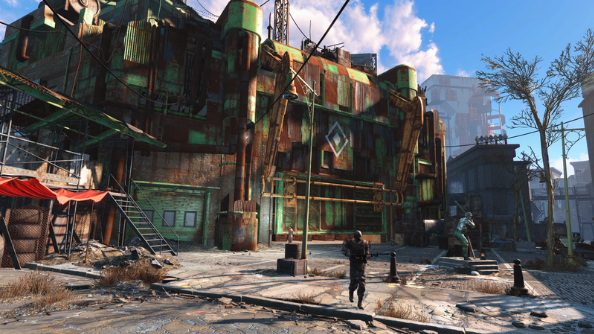 A real feast of Fallout 4 news awaits you here, like a buried basement full of baked beans. Bethesda have announced that a Fallout 4 Creation Kit – the same used to develop the game – will be made available for free early next year. And true to form, they won’t rely on the community to build on their shattered Boston. Following Fallout 4’s release on November 10th, Bethesda will be working on “a lot” of DLC, all covered by a $30 season pass and complemented by regular free updates.

“The most important thing in our games is the freedom you have to create your own experience,” write the developers, “and modding is a big part of that.”

As usual, Bethesda have worked to keep Fallout 4 open and moddable throughout its development. Unusually, the same mods will come to Xbox One and PS4 – and who knows, perhaps that amplified audience might provide incentive for even more ambitious amateur efforts than we’ve seen in the past.

Bethesda don’t know quite how much DLC they’re going to make for Fallout 4 – but rather than split it between multiple season passes, they’ve decided to charge $30 for the whole caboodle.

“Based on what we did for Oblivion, Fallout 3, and Skyrim, we know that it will be worth at least $40,” they reason. “And if we do more, you’ll get it all with the Season Pass.”

Finally, those regular updates: modelled on Skyrim’s, they’ll be incorporate fixes and new features. Think of the mounted combat, legendary mode and kill cams that came belatedly to Tamriel. Bethesda plan to work with the community to work out where their time is best spent.

“The support and excitement you’ve given Fallout 4 has energized us even more to do everything we can in these final months to make this our best game yet,” finish the studio. “There’s so much there that we haven’t talked about or spoiled, because we want you to discover it, to make it your own.”

Cripes. Here’s everything we know about Fallout 4. We’re still going to be talking about this one in five years’ time, aren’t we?