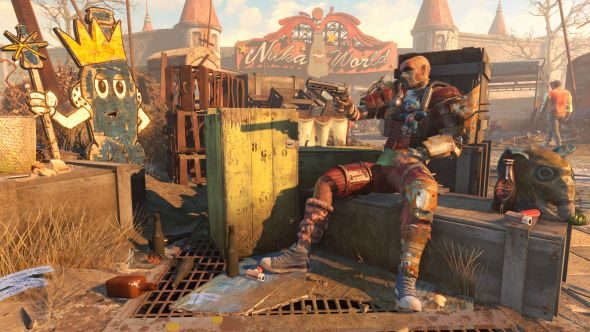 Well, that last bit shouldn’t be too surprising. Fallout 4’s getting bigger again come August 30, with the fun-park themed Nuka-World DLC that adds a whole new questing zone of cola-themed adventure. There’s new everything – weapons, enemies, raiders and quests – along with a storyline to play through.

As for the future of the series, we find that Fallout: New Orleans rumour a little far-fetched.

Your £14.99 / $19.99 / €19.99 gets you a new region that’s split between an “open wasteland” and park zones. Mentioned are the Safari Adventure, Dry Rock Gulch, Kiddie Kingdom and Galactic zones. You can see a glimpse of each in the ear-worming trailer above.

Nuka-World also introduces the ability to lead gangs of raiders and take settlements by force. Presumably that’s what the new plotline revolves around, and why they’ve added a whole batch of new baddies to band with/kill.

A bit more info, as well as new screenshots, over on Steam.