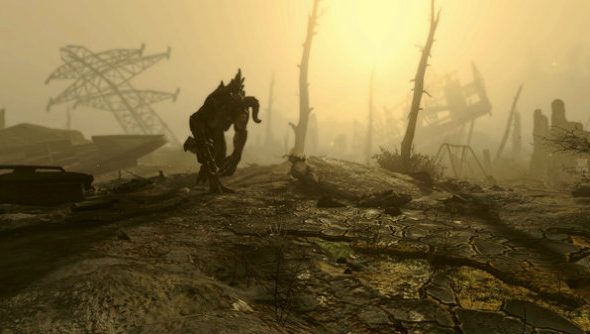 Update March 21, 2017: It looks like Bethesda’s “it’s out right now” announcement at this year’s E3 will be Fallout 4 for the HTC Vive. Back in June 2016, the Fallout developers said they would release Fallout 4 in VR within 12 months, making an E3 release perfect.

Bethesda have now announced that Fallout 4 in VR will be playable on the show floor, so I reckon there’s a damn good chance it’s getting a surprise launch during their show.

Check our homepage for the latest PC gaming news.

In an interview with HipHopGamer, embedded above, Bethesda’s Pete Hines says Todd Howard told him Fallout 4 in VR will “blow your mind”.

Update November 21, 2016:Bethesda have been quiet on the release of Fallout 4 in VR for a while now, after promising its launch “within the next 12 months” back in June. But it seems like things are still on track.

Assuming the goalposts haven’t moved, that means we could be exploring the Commonwealth in virtual reality rather soon. Let’s hope it doesn’t make us feel like we’ve got rad poisoning.

When asked by Glixel if Fallout VR was still being made at Bethesda, Howard says simply, “We definitely are.”

“That’s the promise of VR, being in a big virtual world,” Howard explains. “The core experience, meaning you put on the headset and you’re standing in the world of Fallout and can go where you want, just that little bit is every bit as cool as you hope it would be. Once we did that, we were like, ‘OK, we gotta see where this goes.'”

The VR audience is obviously significantly smaller than a traditional game, but it’s not like they’re creating an entirely new game, so the risk can’t be too high. Plus, with the rise of more affordable headsets like PSVR, the audience is definitely growing. Surely full-fat experiences like Fallout 4 will also grow VR interest, leading to even more owners.

“We’re not so worried about how many we’re going to sell or what the market is,” Howard says. “That will all sort itself out. We have an opportunity to make something really unique. We’d rather do that than make some other tiny experience. I don’t think that’s what people want from us.”

After the announcement yesterday, Bethesda have now sent around the official word on Fallout 4 VR. The plan is for it to release “within the next 12 months” but in 2017, giving us a release window of the first half of next year. They also only mention the HTC Vive as a platform, though the open nature likely means it will be usable on the Oculus – and any other device – as well.

VP of VR at HTC (initialisms!) Joel Breton says that they are “thrilled to welcome the incredible world of Fallout 4 to the HTC Vive platform. Players are going to be blown away when they experience Fallout 4 VR with the full immersion offered on the Vive.”

An early build is also playable on the show floor at E3, so we’ll be bringing you hands-on impressions of Bethesda’s first foray into virtual reality as soon as possible. Bethesda bugs but right in your eyes? Not sure that’s something I want to experience.

Original story Jun 13, 2016:If you’ve ever wanted to come face-to-face with a deathclaw, tonight you got one step closer to your bizarre wish. Bethesda are bringing Fallout 4 to virtual reality, you see, allowing you to escape to a post-apocalyptic hell whenever real life gets you down.

Bethesda showed off Doom 3: BFG working in VR in their E3 booth back in 2012. Since then, they’ve quietly continued their work in the VR space and they’re offering everyone at E3 the chance to take a virtual tour of Hell in a VR experience set within new-Doom. But they didn’t stop there.

“We think the greatest promise of VR is its ability to immerse players completely into virtual worlds,” said Bethesda’s Pete Hines. “And that the best games for that experience will be first-person, open-world RPGs.”

With that, Bethesda announced that Fallout 4 would also be available for people at the show to play. Fallout 4 isn’t just for people in L.A., though – it’s heading to HTC Vive in 2017.

Bethesda promise to remain leaders in the VR space for triple-A gaming experiences, so expect more VR announcements from the company in the future.