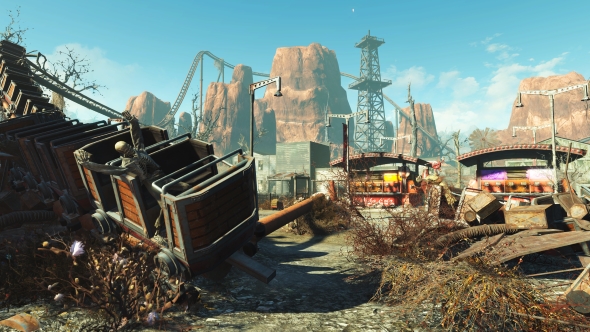 Fallout 4 VR has made its reappearance at Bethesda’s E3 2017 event. Bethesda also announced that Doom will also be available in virtual reality.

Is VR doomed? It is now.

If speeding around Doom’s arenas wasn’t enough of a thrill, actually tearing around in virtual reality could be incredible, providing it doesn’t make you want to barf.

“Developing a Doom game specifically for virtual reality has provided an exciting opportunity to not only surround players with the world of Doom like never before, but also let them experience and explore the UAC and Hell in new ways, playing as new characters with totally unique tools and abilities,” says Robert Duffy, CTO at id Software.

“Since the hallmark of any Doom game is combat, we’ve made it our top priority to ensure moving, shooting and killing demons with overwhelming force in virtual reality is as brutal and rewarding as it is in the Doom experience that fans have been enjoying for the past year,” adds Doom game director Marty Stratton.

We already knew Fallout 4 was heading to VR, but Doom is a nice surprise. See it in action in the new trailer above.

Here’s how Fallout 4 looks in VR:

Fallout 4 VR is releasing this October.

There’s no word on a release date for Doom but we’ll update you once there is. Oh, Doom is called Doom VFR. We imagine the “F” is a naughty word.