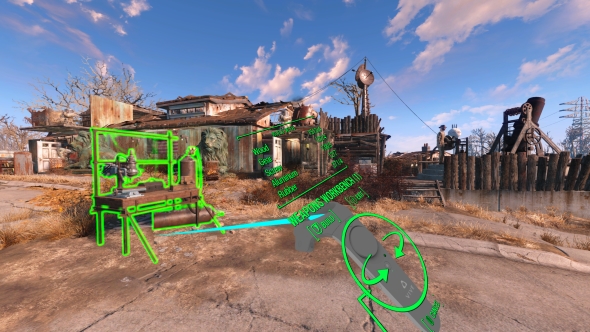 As the lift inside Vault 111 lurches to a halt, I am provided with Fallout 4’s money shot: the first view of a vast open world, the bright light of the sun saturating my vision.

I have been here before, but this time I am seeing it in VR, which – visible pixels aside – makes it appear almost real. And while my brain knows it is all synthetic, something in what I guess you would call my soul is fooled by the verisimilitude of the digital landscape in front of me. Confronted by the relentless, brown, charred tree stumps and centuries-old rusted remains, I feel myself deflate. I let out a sigh as my shoulders slump. Fallout 4 VR’s nuclear-devastated landscape gives me a tiny, but genuine, insight into the depression that living in this ever less fanciful nightmare future will induce.

Don’t have a HTC Vive? Play Fallout 4 VR on Oculus Rift  instead.

That is not the strangest aspect of Fallout 4 VR, though. For that you need only look at the change in tone I experience an hour later into my play session. Using the workshop tools, I tear down old walls, recycle cars, and build civilisation anew, simply by pointing and willing it (also known as ‘pressing buttons‘) to happen. I do this to the upbeat sounds of Diamond City Radio. And as I angle a sofa just right, and place a table lamp in the exact corner I want, I find my foot is tapping along to the beat of ‘Atom Bomb Baby’. Not just my foot; my head and hips are swaying, too. Yes, I am dancing while doing DIY in the nuclear apocalypse. 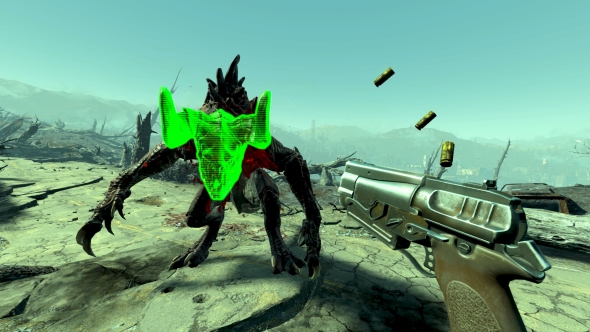 Before going into Fallout 4 VR, I had a suspicion that the settlement crafting may be the element that benefits the most from the transition from mouse-and-keyboard controls to gestures in virtual space. I had always found slotting together a building a touch fiddly in the traditional Fallout experience, but being inside the building makes everything feel more intuitive.

On your left-hand controller sits a roulette wheel of items – you simply select your material and blueprint from here, and then use the right-hand controller to place them. The level of control offered allows you to make minute adjustments, but the fact that everything is the right scale for your viewpoint inside the game makes the results vastly more impactful. Constructing a house around you is exciting in a way only VR can deliver, as if you are participating in an episode of Extreme Makeover: Apocalypse Edition. It is home improvements with all the satisfaction and none of the hard work. 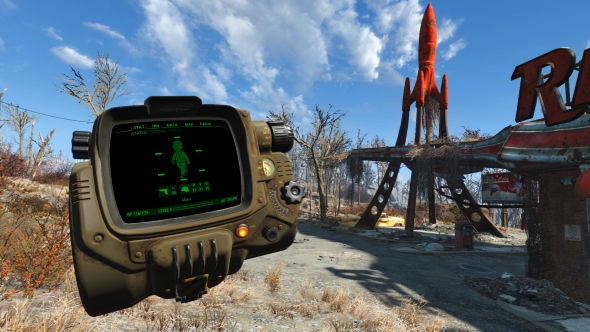 What about everything else, though? As much as I would happily spend hours hammering together the perfect Sanctuary, there is a missing child to find and a scary android issue to deal with. How does all that hold up with the change of controls? It is easy to be skeptical about how a huge RPG would translate to VR, but Bethesda have largely triumphed with Fallout 4.

Teleportation movement is available, but the stop-start nature of it quickly becomes frustrating due to the literal miles of ground to cover. Thankfully, you can opt for a more traditional system in which you trace your thumb over the left-hand trackpad. Holding your thumb forward will translate to walking forward, and turning your body will adjust your facing angle. It takes just a few minutes of adjustment before it feels natural. Combined with the fact that you have a small, but useful, area where you can physically move your body (great for dodging enemies), this is the best traversal system I have experienced in VR so far.

Shooting is pretty good too, but maintaining accuracy without the benefit of a crosshair is incredibly difficult. Close-up shotgun blasts and automatic pistol kills feel great, but medium- and long-distance encounters rely entirely on V.A.T.S, making it feel mandatory rather than a bonus here. 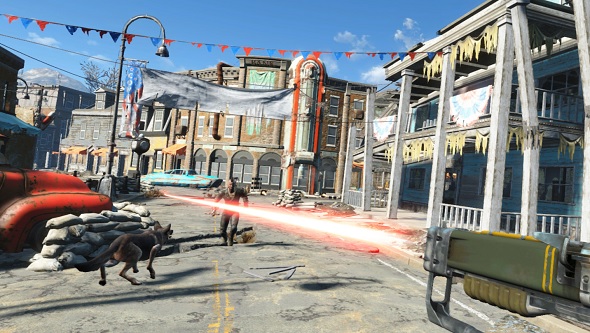 There is also the problem with the impression of weight. While I really love using the pistol, swapping out to a rifle or minigun breaks the illusion. You can swing a weapon that weighs as much as a man with a simple flick of the wrist, which partially corrodes the fun of using such a colossal gun. That opening moment where you fight the Deathclaw in Concord? It is terrifying in VR, with the beast towering over you as it goes in for the gory kill, but the shootout doesn’t feel quite as chunky as it should.

That is a small niggle in what is a real accomplishment for Bethesda, though. Transforming a huge open-world RPG into a VR game is no small feat, and for it to arrive with so few compromises is surprising (especially for Bethesda) and admirable. I am not entirely sure experiences like Fallout 4 are what I want from VR – I would much rather have a game designed for virtual reality, rather than play traditional games with an added dimension – but those looking for worlds to explore far more literally will find their wanderlust sated by Fallout 4 VR. Provided you can stomach 70 hours of nauseating virtual reality headset use, of course.