Out in the Commonwealth wasteland, sheltered within the outcast community of Goodneighbor, there’s an unreachable terminal. Blocked behind a chair, whirring and glowing a familiar radioactive DOS green, it’s a bug Bethesda haven’t got around to fixing in the three and a half months since Fallout 4 released. The machine belongs to Bobbi No-Nose – a ghoul with grand criminal aspirations, but an incidental character. One of many.

Google ‘Bobbi’s terminal’, however, and you’ll find three pages of related silent wailing. The most desperate players have resorted to a little meta-hacking: diving into Fallout’s dev console to reposition the terminal, and even shrinking the player character slightly to fit the gap.

Not all of the Commonwealth’s most impressive spaces were created by Bethesda. Here are the best Fallout 4 settlements.

Why all the effort? Because one of Fallout’s great joys is in exploring the interior of a character’s mind. It’s less explicit about it than Psychonauts, but often has you emptying out the contents of an NPC’s character by rifling through their belongings. 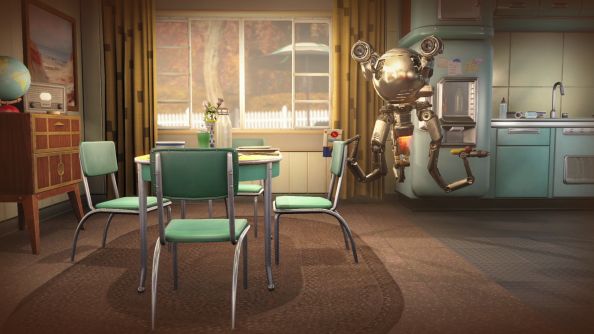 That’s also the whole conceit of Gone Home – whose characters are never seen but leave behind the trappings of layered, complex lives – and it should be no surprise that Fallout pulls at some of the same design principles. The Fullbright team cut their teeth on Bioshock 2, while Emil Pagliarulo, the man responsible for leading Bethesda’s first-person reimagining of Fallout, once worked on the Looking Glass immersive sims that Rapture harked back to.

Both games make their worlds tactile, rendering every last piece of their environments a physics-enabled object to be played with – presumably at great expense to performance and the time of their asset artists, who are forced to assume that any innocuous mug or beer bottle might be picked up, turned over and studied in detail.

But these developers carry the costs, because they believe in the power of environmental storytelling. They know that when the player makes the synaptic leap from a headless skeleton to the gun still clutched in its bleached hand, the story they tell themselves is going to be more powerful than any line they could feed an NPC. 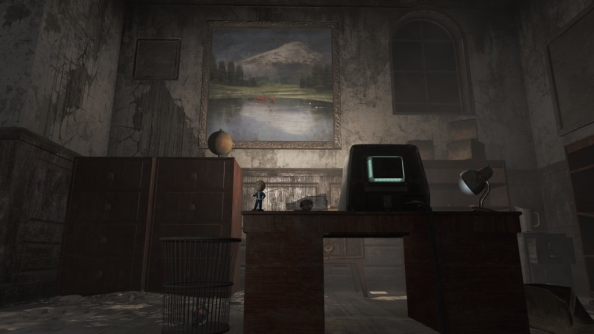 The character depth that isn’t sunk into Bethesda’s increasingly simple conversation system – which now tends to offer a yes, a no, and an I’ll-do-it-but-I-don’t-have-to-like-it – is instead scattered about their feet. You don’t truly know anybody in post-war Massachusetts until you’ve stumbled around their basement looking for secrets.

One block away from Bobbi’s place, there’s a sassy Assaultron running a weapons and ammo depot named ‘Kill or Be Killed’. KL-E-0 is a single NPC doing it for herself, but still a US government military machine with protocols to attend to, so her locked terminal is filled with contingency plans: detailed descriptions of how she would go about efficiently murdering each of her neighbours, just in case. To remove Bobbi, she’d sneak into the ghoul’s hideout at night, dismantle the lights, and take down her crew one by one. Next-door-neighbour Daisy she’d tackle with a long-range laser to avoid suspicion – but bar singer Magnolia, a fellow “working girl”, would get away with warning arson.

Meanwhile, in Diamond City, an anonymous reader of the Publick Occurrences advice column professes their love for a colleague. A little observation a few doors down at the schoolhouse suggests it’s the doomed love of a French-accented Handybot for the town’s teacher. 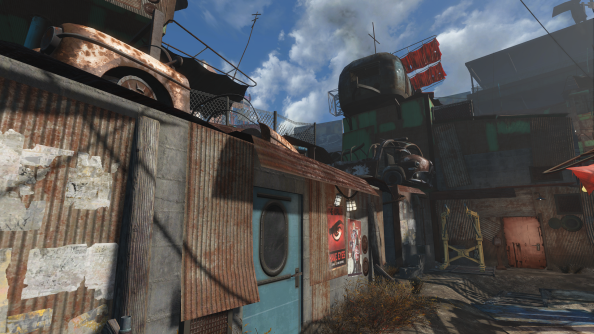 But Bethesda’s commitment to their characters is best observed in the most incidental of all: mouthy street vendor Moe Cronin. His house can be found on the path to Nick Valentine’s Detective Agency, filled with bats and balls – the memorabilia left over from pre-war Fenway Park. Like the player, however, Moe can only piece together a version of the truth from the objects scattered around him. He insists that baseballers batted to the death, relied on their gloves to absorb bullets, and used baseball cards to keep track of kills. The balls he’s placed ceremonially in glass cases were, he believes, tokens given to the children who survived dead players. Once you’ve broken into his corrugated iron apartment and seen the extent of his singular obsession with a lost sport that never existed, it seems a shame to try and set him right.

While Bethesda have long engaged in this sort of thing, it’s in Fallout 4 that their mechanics have started to encourage the same granular attention to detail from the player. This is a game that at first appears to function almost identically to its eight year old predecessor – until you reach a workbench, and realise that any old battered dinner tray or broken lightbulb can become the most sought after item in the wasteland, depending on your needs at the time. 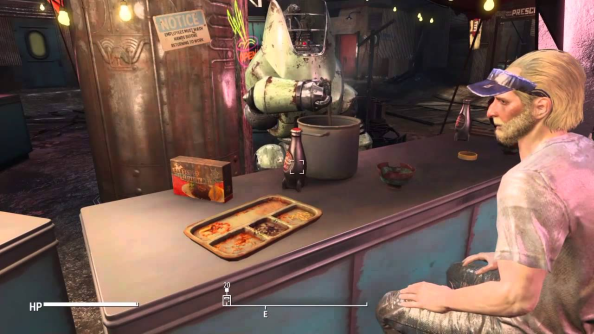 The very best RPGs work in this way: coupling scripted quests with self-set objectives. Yes, I’ll delve into an army facility in the search for my son – but I’ll keep an eye out for bags of concrete to prop up my more outlandish settlement creations along the way.

Pushed to look beyond the sunlight-speckled dust particles into the corners of the Commonwealth’s ruins, players are exploring the personalities Bethesda haven’t baked into dialogue as physical spaces. That’s the reason players are so maddened by Bobbi’s unreachable terminal. They’re prevented from getting to know a character in the way we’ve been taught to – joining the dots ourselves.