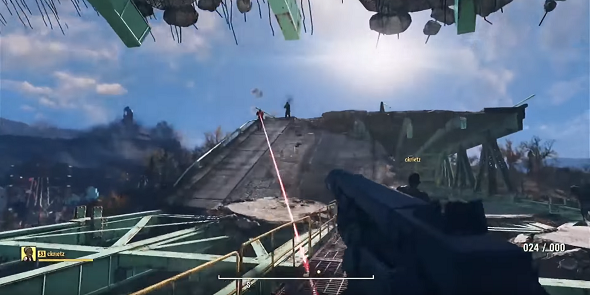 The NPCs in Fallout 76 will not be gods or men, only ghouls. Specifically, it’s a new breed of intelligent ghouls who can wield guns, known as the Scorched, that will replace the AI-controlled human enemies such as raiders in previous Fallout games.

If you don’t know, ghouls are zombie-like mutations of humans who have been turned into feral creatures due to prolonged exposure to radiation. Fallout 76’s ghouls, however, are a more intelligent breed who are still able to operate firearms.

The only other humans you will meet in the game will be other online players, then – not NPCs.

Will Fallout 76 be one of the best multiplayer games on PC?

As Danny O’Dwyer notes in Noclip’s The Making of Fallout 76 documentary, raider factions wouldn’t make sense in the game’s lore, considering that it takes place 25 years prior to the other titles in the series.

Joining the Scorched will be a host of new mutated creatures that draw from inspirations ranging from conspiracy theories to West Virginian myths. Monsters that we have caught glimpses of so far include two-headed possums, giant sloths, and intelligent plants. Also beware of the Mothman, a terrifying creature that stalks players who drift to far into the wild of forests of Fallout 76’s open world.

“[Fallout 76] is closer to when the bombs actually detonated, so there’s more radiation,” Nathan Purkeypile, lead artist at Bethesda Game Studios, says. “So you can get crazier mutants and giant plants because it’s radiated. It’s half-life, it’s going to decrease over time. That’s our justification. If you haven’t seen that in future Fallouts, maybe that was such a bad mutation that it died out but here it still exists and is in full swing.”

We now know that we can nuke other players, which begs the question, would increasing the world’s radiation and producing even weirder creatures be possible too? We can but dream.