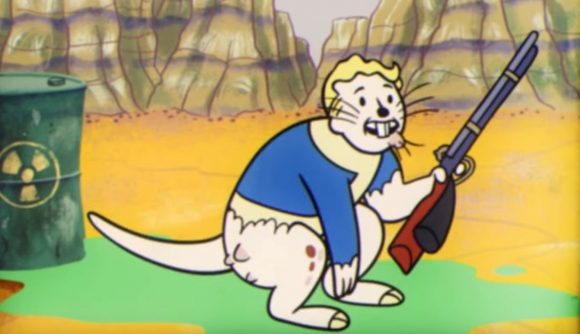 Bethesda game director Todd Howard seems like a hospitable guy who is happy to partake in interviews and give grand tours of the Bethesda’s offices. What could possibly spoil his angelicness? Well, just don’t start calling Fallout 76 a survival game – he doesn’t like it.

The seasoned developer made sure to express his resentment for how  the term ‘survival’ has been used to describe Bethesda’s next entry in the Fallout universe. His issue is that he doesn’t think Fallout 76 falls into the same category of game as those that belong to the survival genre.

“We avoid the word ‘survival’, because people’s minds immediately go to DayZ and Rust and certain other games, and those comparisons are not really accurate for what we’re doing,” Howard explains in an interview with The Guardian.

Fallout 76’s release is right around the corner. Why don’t you check out our list of the best multiplayer games while you wait?

Howard adds that while Fallout 76 has an online focus – much like DayZ and Rust – it differs immediately in that it retains the solo play of the series. He even seems to advocate this playstyle himself: “If you think about the survival modes we’ve made in Fallout 4, it has that vibe … Fallout 76, although it’s an online game, when I play it, I mostly still play it solo. We like those experiences as much as our fans do.”

Howard’s been open to discussing Fallout 76’s development over the past few months, including the prospects of adding VR support to it in the future. Bethesda is one of the few big game developers actually supporting VR by porting older games from its roster to VR – as can be seen with Fallout 4 VR.

As for the Fallout series diving into multiplayer territory, preparations began way back in 2015 according to However, before Fallout 4 was even released. The idea of multiplayer was there from the beginning: “We never actually got to prototyping it [during development of Fallout 4]. It was just the design: if we do multiplayer, what would it look like?” Howard says. “It was really just on paper. We started putting people on it in 2015, before we finished Fallout 4.”

Fallout 76 is slated for a release on November 14 this year.