Fallout 76 raises a great number of questions. Many of the answers to these – the frequency of update schedules, player feedback, and the pros and cons of human NPCs – all fall comfortably within Bethesda’s purview.

Others, however, are beyond the studio’s area of expertise. Questions of science. For answers to those, we sought out a nuclear physics expert – Professor Paddy Regan. He teaches and researches the structure of matter at the University of Surrey. Regan also measures radiation at the National Physical Laboratory for the benefit of those working in the fields of nuclear waste and pharmaceuticals. As such, he’s perfectly placed to answer our questions about Nuka-Cola and Scorchbeasts.

Although, just in the interests of transparency, he hasn’t actually been patrolling the wastes himself. “I can tell you I’m not at all familiar with Fallout, because I’m a 51-year-old crappy, mean father,” Regan informs us. “I’ve got a teenage son who spends his entire life playing Fortnite, which I’m told is normal.”

Ah well, he should still be able to offer plenty of insight. Onwards. 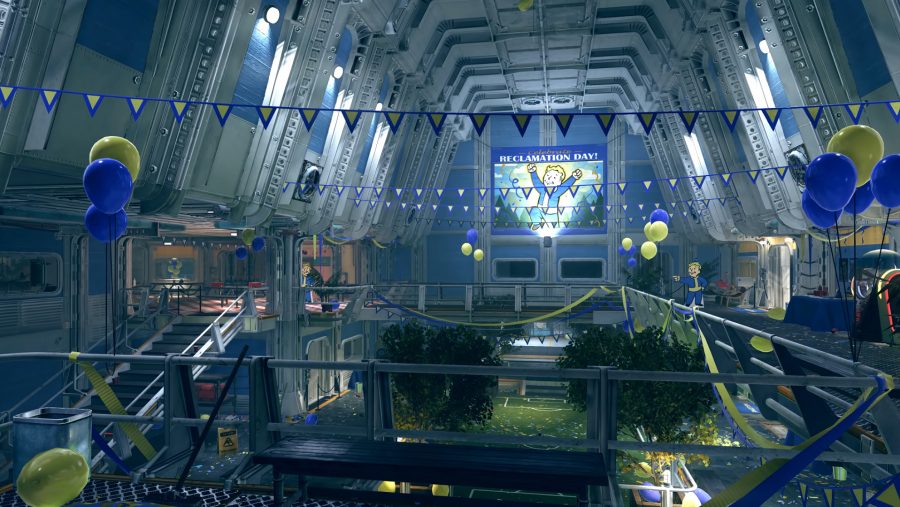 Would it be safe to leave the bunker?

What’s striking about Fallout 76’s setting is just how recent its nuclear history is. While Fallout 4 gave us a front row seat to the nukes, the bulk of the game took place 210 years on from when they went off. This time, by contrast, we’re emerging from the bunkers just 25 years after the bombs have dropped. What will that mean for our precious skin, most of which we’d like to keep attached to our faces?

“The amount of radiation that happens immediately is not insignificant,” Regan explains. “But most of the radioactive material becomes not radioactive pretty soon after that nuclear weapon has been exploded.”

That iconic mushroom cloud? It gives you a pretty good picture of what’s happening in the immediate aftermath of a nuclear detonation. Most radioactive material shoots straight up into the troposphere – the upper layer of our atmosphere – where it’s swirled around the world by strong winds.

In fact you can find evidence of that on Earth today. The nuclear weapons tests carried out in the 1950s and 60s by the UK, US, and USSR pushed enormous amounts of radioactive fallout around the planet – even to spots like Antarctica, far from any bomb sites.

Living in a bunker for 25 years would be dangerous, more than coming out

“The half-life for most of the stuff that comes out of fission fragments is much shorter than years,” Regan says. “After about ten or 15 days, you’ve got a limited amount of different radioactive isotopes that are present. And after 30 years there are only two that are actually of significant strength.”

Those are Caesium-137 and Strontium-90, if you really want to impress your friends. And they can be nasty – Strontium-90 in particular can cause bone cancer. But the odds of encountering dangerous radiation in the wilds of West Virginia 25 years on would be pretty small.

“Actually living 25 years in a bunker would be more dangerous than coming out,” Regan suggests. “If you were in a bunker for 30 years, it’s possible there would be a risk of a cancer you would not have got.” 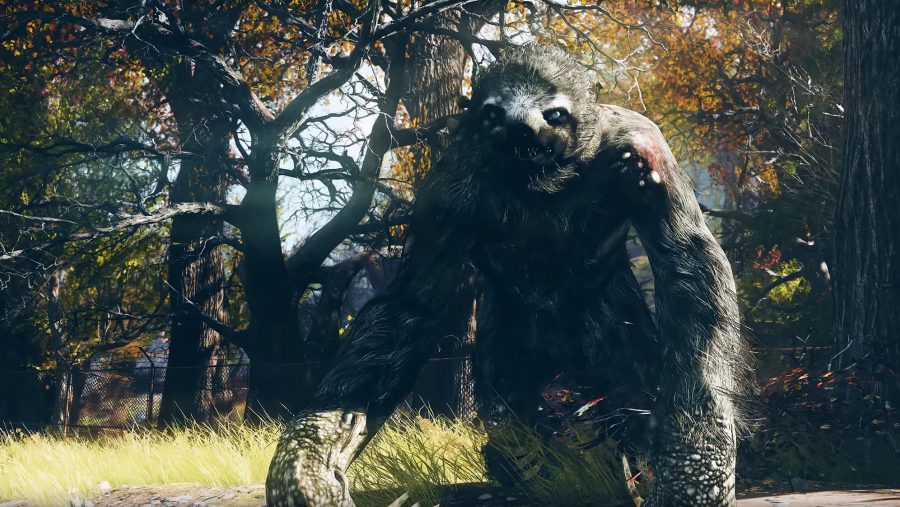 How is West Virginia still so green and leafy?

While Bethesda’s previous Fallout games have found focal points in major American cities – DC, Vegas, and Boston – West Virginia is famously made up of country roads. As such, the map in Fallout 76 has not been subjected to any direct nuclear pummelling. Other than from players, anyway.

That’s left us with a palette of healthy greens and autumnal browns, rather than the toxic shades we’ve become accustomed to. Landmarks are intact and homes still standing, if empty. In that aspect at least, Fallout seems to be true to reality.

Although the hydrogen bombs tested by the British have had an explosive yield about 100 times more powerful than those that dropped on Hiroshima and Nagasaki, they still produce explosions ‘only’ four or five miles across – leaving the surrounding area intact, at least to the naked eye. The accompanying EMP pulse, however, could cause lasting damage on a far greater scale.

“What kills people is the infrastructure that’s wiped out,” Regan says. “No communication, no access to food or running water, sewage, cholera. Same as an earthquake.”

As for the environment – there’s reason to believe it would fare better after nuclear war than before. In the aftermath of the Chernobyl disaster, radioactive fallout was spread over a large, localised area that was deemed uninhabitable for humans.

Modern hydrogen bombs "have a yield not in kilotons, but megatons, which is millions of tons of TNT". That term familiar at all to Fallout 3 players?

“Counterintuitively, what has happened there is that the ecology of the local environment has massively improved,” Regan says. “They have species thriving there that were not there for the past 150 years. And the reason is because there are no humans there. Animals live for a relatively short time – if there are no human predators messing up the environment, then actually nature’s pretty good at swapping out radioactive materials.” 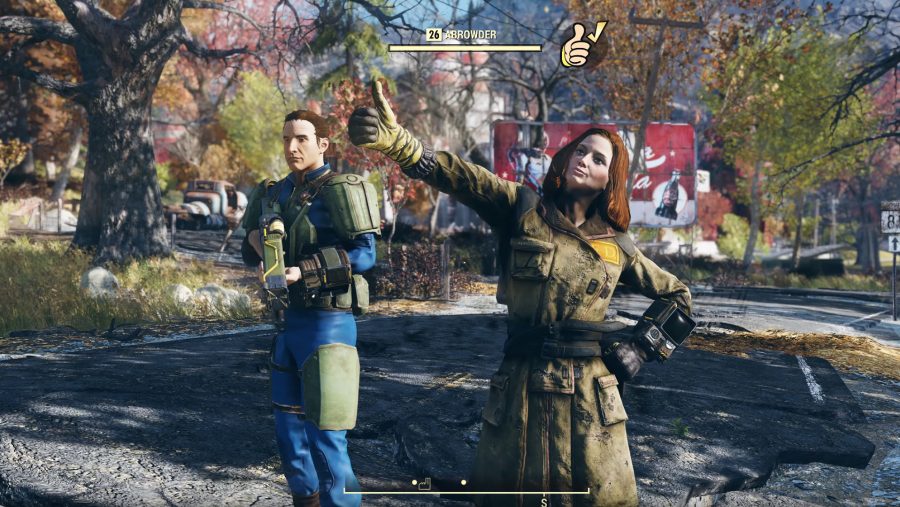 Could you eat the Cram and drink the Nuka-Cola?

Most food and drink in the Fallout games come with a side helping of radiation damage. That’s particularly pertinent in Fallout 76 where, for the first time, hunger and thirst appear not to be optional levels of difficulty but integral parts of the game.

That kind of process doesn’t actually make the food radioactive. If food was treated to a big dose of neutrons in the aftermath of a nuclear attack, however, it could wind up that way. And the same would be true for any fish or crabs taking up nuclear material and transmitting it up the food chain to humans. So go easy on the mirelurk meat.

“Getting radioactive material inside your body is generally not good for your health,” Regan advises. “Stuff in tin cans I think would be ok – what you’d be more worried about is eating bits of meat, or cows that had been grazing on the fields in the three or six months after the attack happened.” 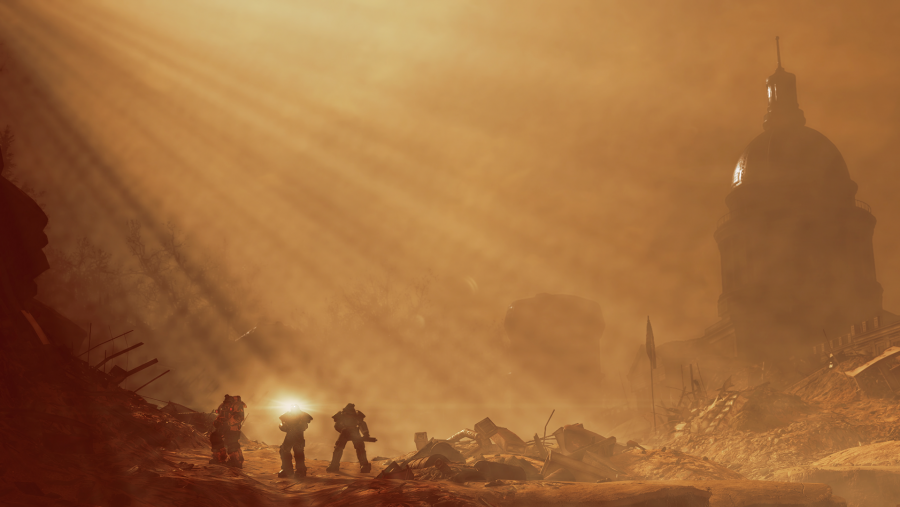 Exactly how likely would you be to meet a Scorchbeast?

Fallout 76 features some of the strangest creatures in the series to date. Winged, wyvern-like monsters own the skies, while oversized insectoid eyes light up the woods like huge, orange orbs.

The justification for this upsurge in folklorish freakery is the timeline: these hideously mutated creatures are created by the immediate aftermath of nuclear war. By the beginning of Fallout 3, the environment can no longer support them and they have died out. But does science have Bethesda’s back?

“The reality is, if a creature has a significant radiation mutation, that generally means that it does not reproduce,” Regan says. “We get mutated genes all the time, and the likelihood of you passing one on to a healthy offspring that can survive is limited. Generally, nature gets rid of it. The three-eyed fish from The Simpsons is a nice fiction.”

Some science, like the post-war ‘mega-mouse’ project in which a colony of rodents was dosed with radiation, does suggest that abnormalities may show up in later generations.

“But that means you’ve had ten generations of breeding with people who maybe haven’t interacted with that radiation,” Regan points out. “In general, healthy genes are the ones that survive.”

Which is all bad news for those of us hoping to live to see a Deathclaw IRL. Sorry, everyone.