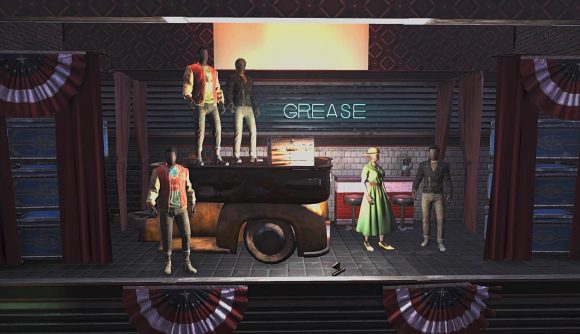 One of the things I’ve missed most over lockdown is theatre. The hustle and bustle of the crowds is usually hit or miss, but the musical spectacle of the production is often worth it regardless. While the outside world isn’t so available, players are still thriving in virtual ones, like one group of Fallout 76 players who set up a playhouse and kabuki theatre in Appalachia.

One of the players tells me that things started with a movie theatre build, though they soon found a player theatre to be more interactive. “Random players come by and suggest the next show or folks on Reddit,” Northern Harvest tells me. “I’ll also get an idea from in-game apparel or items (like the straitjacket promoted me to do Clockwork Orange). It’s loads of fun trying to pick a scene from a play or film and trying to recreate it. We just finished the ‘opening of the ark’ scene from Indiana Jones and the Raiders of the Lost Ark!”

The theatre hasn’t been around for long, but we’ve already seen oodles of fantastic sets. Alongside Indiana Jones, we’ve seen Grease, Macbeth, The Assassination of Abraham Lincoln, and more. “It’s still new, fresh, and evolving,” Northern Harvest explains. “I had my first live audience the other day, and a few roleplay groups have reached out to arrange for their crew to come down. So it could move to live theatre eventually (though it’s a small stage). The Wasteland was a cultureless void before we opened up, so our little playhouse theatre is bringing some class and classics back to Appalachia.”

If you were lucky, you may have seen the #Fallout76 Theatre Company's wonderful performance of the Shakespearean classic "Macbeth" at the Charleston Playhouse Theatre. pic.twitter.com/QXemRwZQRB

The #Fallout76 Theatre Company showed the popular American classic Grease!
Many-a-wastelander walked away with catchy tunes stuck in their heads.

Even the Liberator bots were zooming about singing "ramalama ding dong"!

And, Indiana Jones, with an added plasma grenade:

Someone tossed a plasma grenade onto my Indiana Jones and the Raiders of the Lost Ark stage set, and it totally works. from fallout76settlements

You can follow the Fallout 76 Theatre Company on Twitter if you need some wholesome builds in your life. The group is PS4-based, so you might struggle to visit them on PC, but we’ve still plenty of stuff to enjoy.

If you’re looking for more open-world games, you can hit that link.