Vault Boy. Power armour. The overseer. Deathclaws. There are some elements of Fallout so intrinsic to the series that it is easy to forget they were ever invented. Perhaps they never were. It may be that we all came from the vaults and the Fallout games are simply a myth we keep telling ourselves. A reminder of a painful history we cannot bear to remember yet must not forget.

Related: how did Fallout 1 ever get made?

Only, sorry, no: the other week I spoke to a bunch of friendly, middle-aged RPG developers who claimed they had made the first Fallout. Here are the decision-making processes by which they settled on some of Fallout’s most iconic symbols. 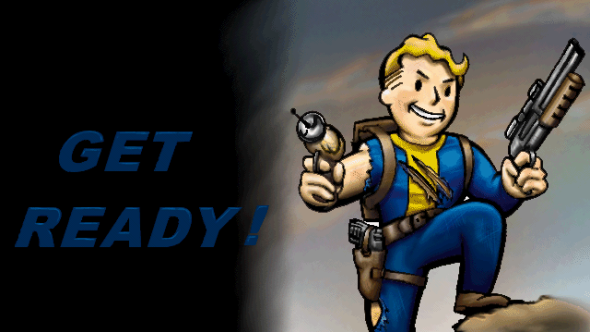 Vault Boy, whose grin now haunts mainstream clothing outlets and the cosplay corners of show floors, came to art director Leonard Boyarsky while he was stuck in traffic.

“Vault Boy was the solution to a problem we had,” Boyarsky tells me. “We had all these icons I helped design, and one day I looked at them on my screen and thought, ‘I have no idea what I’m looking at here’.”

As a solution to this convoluted and confusing UI, Boyarsky decided that Fallout 1 should describe your skills via a series of Monopoly-style cards. And, of course, Monopoly has a mascot: the jovial capitalist Uncle Pennybags. Boyarsky designed his own Pennybags, with a twist: Vault Boy’s glee would be juxtaposed with the horrors of the wasteland, to comic effect.

“For some reason, in my mind, this guy was always happy no matter what was happening to him,” he says. “The more horrific the better.” 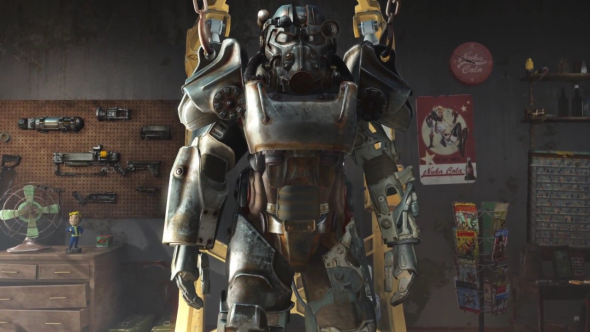 To kids of the ‘80s, the idea of nuclear holocaust did not feel like a tremendous leap. Nor did power armour for the guys behind Fallout. It seemed to be crying out to them.

They were familiar with Starship Troopers, which got its Hollywood adaptation the same year development on the first Fallout game was finished, and lead designer Chris Taylor was reading a lot of science fiction at the time. He particularly remembers John Steakley’s novel Armor, in which exo-suited soldiers fought three-metre-tall insects.

“That was one of those things where we all just looked at each other and said, ‘Well of course we’re going to have power armour’,” Boyarsky says. “I don’t remember debating it.”

“It was one of those obvious things we had to put in the game,” Taylor adds.

However, the iconic look of Fallout’s power armour – replete with helmet and rebreather – did not come together until Boyarsky was called on to create a close-up for the game’s intro.

“[The original design] didn’t work at all,” he says. “So I totally redid what power armour looked like. But from the very beginning we knew it had to be in there.” 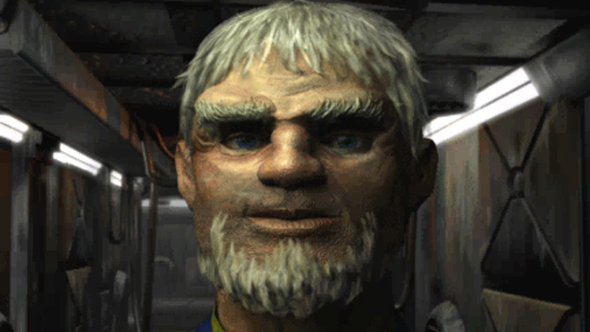 Now that the Fallout universe is so deeply embedded in the PC gaming psyche, the decisions that led to some of its mainstays can seem outrageously flippant. Overseers, for instance.

“I think we just needed a guy to send you out on your first quest,” Boyarsky says.

“The nefariousness of the vaults came a little later, with Fallout 2,” Taylor points out. “Originally it was that we needed there to be a single contact so we could write one voiceover character. Every area needed a voice actor.” 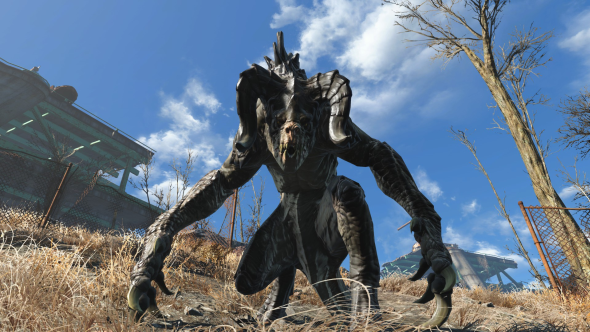 Deathclaws are the best-known of the wasteland’s fauna – not least because they are the largest and strongest creatures you tend to come across in a Fallout game. But unlike the Radscorpions, Yao Guai, and rabid mole rats, they have no clear progenitor in our pre-nuclear landscape. Turns out there is a good reason for that. The Fallout team found inspiration for the deathclaw among the office decoration of early Interplay.

“We didn’t have a good monster,” producer and lead programmer Tim Cain recalls. “And I would walk through the lobby, and there was that Tarrasque.”

The Tarrasque is a monster that dates back to first edition D&D. Sure enough, it bears some of the telltale motifs of the Deathclaw: the horns, the spiked spine, and, well, the claws. The Tarrasque itself is based on a dragon-like creature of French legend – so in that sense, at least, Fallout’s most fearsome opponent is rooted in our world.