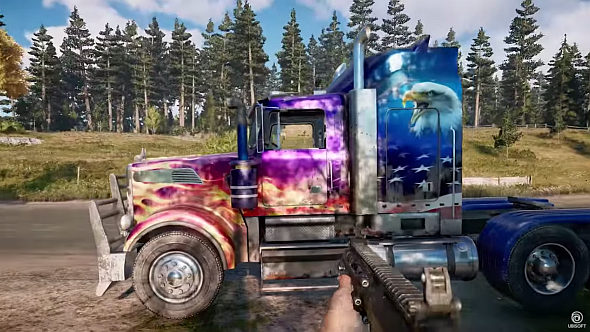 Ubisoft have treated us to a longer look at Far Cry 5 with almost nine minutes of gameplay, complete with developer commentary. If you’re not sold yet, here’s your chance to see a little more.

Montana not your thing? Check out some of the best sandbox games on PC.

Your loyal dog Boomer remains the star of the show, stealing cultists’ assault rifles right out of their hands and bringing them to you, standing up to wolves, and generally being adorable. He’s only one of four companions you can summon via the For Hire system, but why would you pick anyone else?

The devs “want to give you tools that feel like they belong in Montana and your fight against a Doomsday cult,” so vehicles include tractors and a big rig named ‘the Widowmaker’ that’s covered in patriotic American kitsch.

A fishing minigame and a paddle downstream to interrupt a forced baptism shows off Montana’s trees and water, then the player gets in a riverplane to wreak some more carnage.

Ubisoft say “the world we’ve built is larger than any Far Cry before, and for the first time you can explore it in any direction you choose, right from the start.” The view from the plane is stunning, and it must be said: if the finished game looks anything like this, we’re in for a treat.

The demo concludes with the player shooting down a cultist enforcer in an aerial dogfight, because I’m sure that’s how a war against a fanatical militia would go.

Far Cry 5 is due for release on February 27 next year. Here’s the Steam page.