It was around the time when I was using a flamethrower to roast zombie-like cultists in a mission set to Disco Inferno by The Trammps that I realised that I hate Far Cry 5. I’ve been a long-term admirer of the series, especially the snaking direction it has taken over the years, but this fifth installment has extracted the key elements I love and replaced them with zaniness and eccentricity. Far Cry 5 has traded the series’ savage nature for knock-off GTA humour, and I’m pretty upset about it.

Nevermind the humour, why are Far Cry 5’s drivers so bad?

My enjoyment of previous Far Cry games comes from more than just their excellent gun feel, expansive worlds, and sandbox freedom. For me, the appeal has always been in how vicious they have been. They depict savage people in savage lands, making use of deplorable violence to achieve their goals. Blood, bullets, and blades are used in a way that makes you flinch, which is a departure from how bloodshed is typically handled in games. Far Cry’s battles aren’t about being cool; they’re about being awful.

The violence is neatly woven into the politics of the series. The messages of each Far Cry game are not particularly deep, but they do have something to say. Far Cry 2 analysed the brutality of the arms trade in a divided nation, and how people strive to make profit from suffering. Far Cry 3 looked at colonisation and the impact of violence on young people. Far Cry 4 put civil war and military dictatorships under the magnifying glass. All of these games are about the politics of violence, hence the savage nature of their worlds. Bullets puncture flesh and must be wrenched out with pliers, animal skins are sliced from corpses with the aid of a ten-inch blade, and characters snarl their murderous instructions to you through gritted teeth. 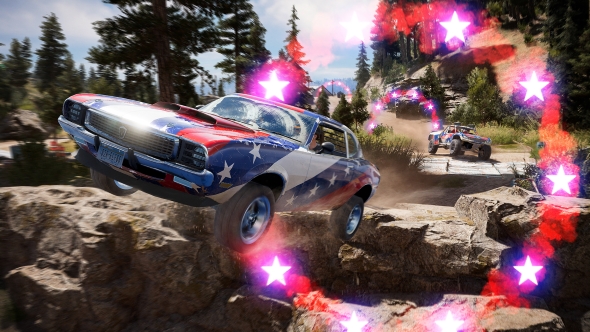 Far Cry 5 has none of this. Immediately noticeable is the altered health system, which eliminates the painful bullet-and-bone removing animations and replaces them with a simple bandage. The violence of hunting is gone, with pelts being invisible loot as opposed to items that must be torn from carcasses. And with the removal of crafting, the connection to wildlife is removed; hunting is now an impactless sport to add a few extra dollars to your back pocket, rather than a necessary evil to increase your chances of survival.

These changes are small components that are part of a larger shift. The tone of the world has been radically altered. Outside of the few core story missions focusing on the cult family members, most of Far Cry 5’s missions are irreverent in tone. Rather than taking the world seriously, your adventures bring you face to face with a variety of characters who feel as if they were harvested from the cutting room floors of Grand Theft Auto and Dead Rising. I’ve already mentioned Sharky Bowshaw of “burn baby burn” fame, but there’s also Guy Marvel, a Z-tier film director intent on creating a bombastic epic; Larry Parker, a conspiracy theorist convinced aliens are invading Montana; and Hurk Drubman Sr., a crazed Republican candidate looking to save the county from “Obama-loving libtards”. These characters are not the oddities of previous games; these are crassly-written caricatures that detract from any compelling story about the Eden’s Gate cult that the Ubisoft attempt to convey.

These strange characters provide even stranger mission objectives. An early quest involves killing bulls while they’re having sex in order to harvest their testicles, all while Marvin Gaye’s Sexual Healing plays over the action. Later on, the game insists on flooding battles with zombies, weakly justified by the cult using drugs to turn innocent people into mindless weapons. The slaughter of these zombies is then used as a set-piece for Guy Marvel’s film. Bizzare doesn’t begin to describe it. 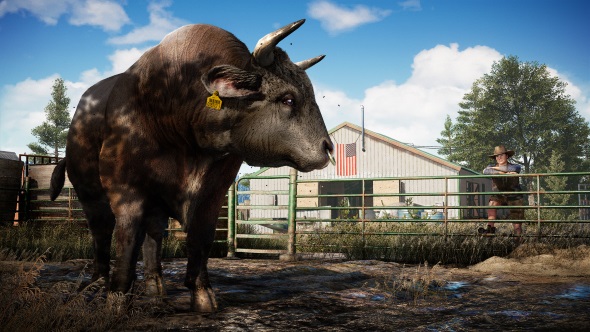 The question, then, is why did Ubisoft trade in Far Cry’s serrated teeth for something so similar to Grand Theft Auto? I don’t have an answer, but I do have a theory: the American setting is just too close to home to maintain the savagery. The US is a country plagued by gun violence and questionable politics. To play it straight and depict brutality in America would be too uncomfortable. Without the defence buffer of a far-away country that means less to the majority of the game’s audience, the only option is satire. If this is Ubisoft’s line of thinking, I understand. I do, however, feel that Far Cry 5’s humour largely misses the satire mark and ends up firmly in the ‘dumb fun’ camp. That would be fine, were this not a game that is attempting to explore serious themes of separatism and armed uprisings.

Ubisoft have proved in the past that they are able to successfully satirise the United States and its problems: see Watch Dogs 2. Alas, Far Cry 5 doesn’t come close. I wish it were braver. I wish its story had something more to say than “cults are bad”. But, most of all, I wish it hadn’t sacrificed the series’ unique savagery for bad copycat humour. Perhaps we’ll see something more uncomfortable return in a non-American setting. But I won’t hold my breath; we never saw the return of degrading weapons, did we?