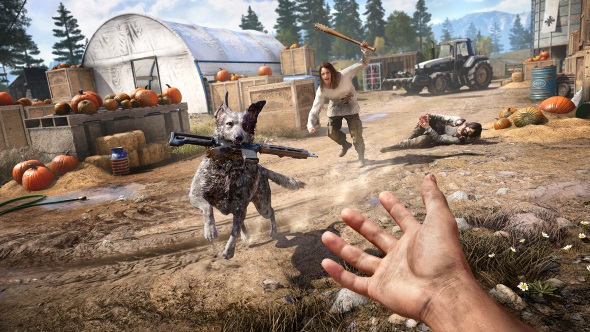 With its vast forests of tall Ponderosa Pines, dense undergrowth, and lakes as wide as the eye can see, Far Cry 5 is a real looker. But, as we all know in PC land, good looks can come with harsh performance, especially in open-world environments. So what is Far Cry 5’s PC performance like? That is what we are here to find out.

See what we thought of cultist Montana in our Far Cry 5 PC review.

Our performance reviews are written to offer an insight into how games run on mainstream PCs. We use hardware similar to what the majority of players have installed in their machines – based on the findings of the Steam Hardware Survey. We test the game on all graphical settings using an i5 powered rig with 8GB of RAM and try to hit the 60fps mark with four mid-range graphics cards. Even if your PC is not identical to our test setups, you should still be able to estimate the performance levels you can expect from your own machine. 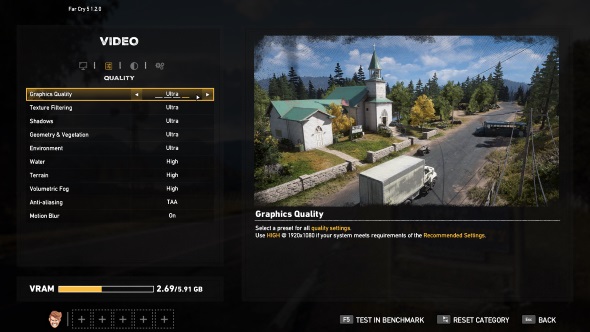 Far Cry 5’s PC graphics options are spread across a couple of menus, but are largely contained in the video quality tab. For a game with so much to see, the options are surprisingly limited: just nine settings, plus an overall preset selector. Rather than a plethora of technology-focused options, there are instead only tabs for basics like textures, shadows, water, terrain, and fog. The most tech-jargon option here is anti-aliasing, which is nicely explained – as are all the options – with visual representations that are useful for those new to PC gaming.

Outside of the quality tab, you will find tools for adjusting brightness, gamma, field of view, resolution, refresh rate, and several other basics. There is also HDR support for those with enabled displays. All adjustments are reflected in a VRAM meter at the bottom of the menu, which helps you keep track of how hard you are pushing your GPU.

As with all modern Ubisoft games, Far Cry 5 features a rock-solid benchmarking tool that puts your settings into action and produces a readout of maximum, minimum, and average frame rates, plus overall frames rendered. If only every game could feature a tool as useful as this.

For our graphics analysis we compare screenshots taken on the four standard presets of ultra, high, normal, and low. These can be freely swapped between using the in-game video menu without the need for game reboots between changes. 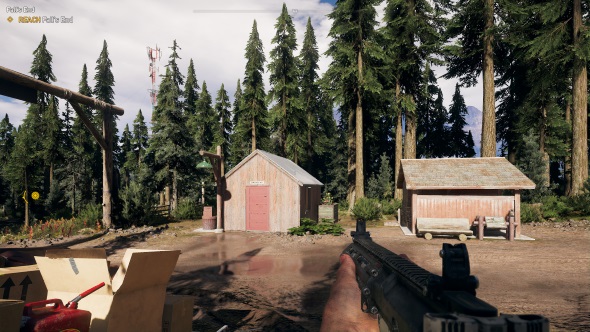 No surprises here, but Far Cry 5 looks lovely at its highest settings. The Dunia engine continues to impress, although it perhaps does not quite dazzle as much as it did in the days of Far Cry 3. The tree line is particularly impressive, with a density that casts a variety of strong shadows, and thick undergrowth settled at the feet of the pines. In the middle distance the pooling of water is particularly impressive, with the soft shadows changing as they meet the puddle to reflect the properties of the surface.

The benchmarking tool reports an average of 65fps on ultra with our GTX 1060-powered machine. With a minimum report of 55fps, Far Cry 5 proves that it constantly performs well, even when under pressure in combat scenes. 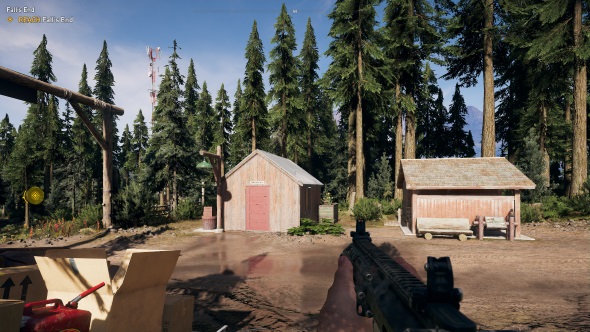 Dropping down to high settings does little to spoil the splendour of Far Cry 5’s most pretty vistas. Shadow quality is slightly reduced, with the edges being just a little rougher than on ultra. There is also a small reduction in environmental detail – take a look at the rocks around the base of the tree on the far right of the screenshot and you will notice that there a fewer stones on high than ultra.

These very minor sacrifices boost the average frame rate up to 70fps, with a minimum of 60 and a maximum of 81fps. Not a huge change, but for those with a slightly less powerful PC this could just tip you into 60fps+ territory. 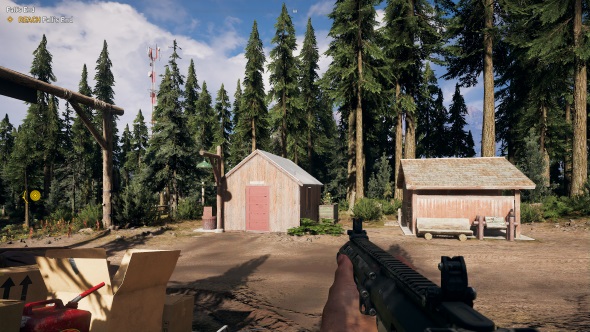 Normal settings reel in several of the more demanding processes. Environmental detail is once again reduced, with the ground-level foliage on the far left of the screenshot appearing much less dense, and more rocks removed from the collection on the far right of the image. The texture quality of the roof slates on the short building is notably reduced, and the overall shading quality of the trees is lower. The realistic water pooling is removed from the road, and large shadows cast by the trees have much rougher edges. The world still looks beautiful but there are certainly signs of it being more ragtag than they were on high.

The resulting performance boost is useful for anyone struggling, though. With an average of 75fps, high of 86fps, and low of 60fps, playing on normal certainly frees up enough VRAM to help out those with less powerful PCs. 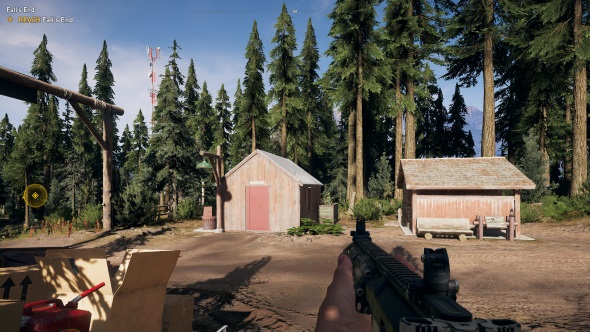 At first glance it is difficult to point out exactly what is low about Far Cry 5’s ugliest settings. This is one of the best bottom-tier presets that I have seen in recent times, with much of the game’s atmosphere retained despite the reduction in detail. Many shadows are still cast, albeit with pixelated edges. The tree canopy still has appropriate shading, although it is easy to spot that there are many missing smaller shadows compared to the higher settings. Pretty much all the small environment details have been removed, with just a few stalks of plant life being present on the left of the image, rather than the thick grass that once stood there.

At low settings, Far Cry 5’s average frame rate clocks in at 85fps, topping out at 95fps and going only as low as 69fps. They are great results, especially considering how much of the game’s pretty appearance it manages to preserve.

To see how Far Cry 5 performs on different hardware we have tested the game on four different graphics cards: two from Nvidia, and two from AMD. We have sampled from both the current and last generation of GPUs, and chosen popular cards according to the Steam Hardware Survey where possible, in order to offer the most useful information. All four cards are tested on the game’s highest preset, which dials every texture option up as high as they will go.

The picture is strong across the board, with standout performance provided by AMD’s RX 580. Red team’s 71fps average on their current generation card is great, and probably down the the partnership that Ubisoft have with AMD on this project. Strong optimisation can also be seen in older hardware, with the R9 380 benchmarking at a respectable 48fps average. That may not be super smooth, but it is an impressive value for an open-world as full of vegetation as this one.

In the green corner, Nvidia cards are performing with equally admirable results. The GTX 1060 does not quite hit the same heights as the RX 580, but an average of 65fps on ultra is a very fine score. If you have yet to upgrade since the days of the 9 series cards, then there is further good news: the ever-popular GTX 970 lags only a few frames behind the 1060. In short: Far Cry 5 can run exceptionally well on a solid range of GPUs.

Far Cry 5 runs wonderfully at 1080p, but what if you own a 4K display? Our UHD test rig – rocking an i7 6700K CPU, Nvidia GTX 1080, and displaying on an Acer Predator 4K monitor – copes respectfully. At a huge 3840 x 2160 resolution on ultra settings, Prey runs at an average of 41 fps, and a minimum of 36 fps. Naturally it looks great at such a resolution, so if you’ve got the power Far Cry 5 is certainly a game you will want to see in 4K, although you may want to opt for lowered quality in exchange for a frame rate closer to 60fps. Can you run it? Take the Far Cry 5 requirements test at PCGameBenchmark.

If you are running a rig similar to our test machine, then good news: you will likely be able to run Far Cry 5 at 60fps using the very highest settings. Of our four test GPUs, the GTX 1060, GTX 970, and RX 580 all managed to run at an average of 60fps or above using the game’s ultra preset.

Those with an R9 380 will have to do a little extra tweaking. Set the overall preset to normal, and then reduce water and volumetric fog to low, and change anti-aliasing to SMAA. This will result in an average of 60fps with the best possible visual quality.

Far Cry 5 has made a great impression when it comes to PC performance. Ubisoft have proven their talent when it comes to PC versions over the last couple of years, so much so that they are my preferred triple-A developers when it comes to benchmarking. Once again, Ubi have furnished a game with detailed, easy-to-read menus and a great benchmarking tool. These features are packaged with a game that performs practically flawlessly on a wide range of GPUs, with some very desirable frame rates.

The best results can be found on higher-end AMD hardware, which comes as no surprise considering the branded splash screen that displays when starting the game. However, Nvidia GeForce performance is within touching distance, and team green certainly get top marks when it comes to performance on older graphics cards. But whatever your set-up, it is clear that mid-range PCs can really get the most out of Far Cry 5.