Far Cry 5 is an incredibly busy game. The sweeping scenery of rural Montana is constantly interrupted by the chatter of gunfire, cultist-filled vehicles tumbling over each other to get at you, angry honey badgers nibbling at your ankles, and eagles determined to claw out the eyes of any human that falls under their shadow.

The series has been building chaos into its systems ever since Far Cry 3 set the series on its current path of toppling oppressive regimes in areas of outstanding natural beauty. For Far Cry 6, it’s time for Ubisoft to reel in the madness and remember the other things that made these games great.

Returning to the wilderness of Montana in Far Cry 5, it only takes about a minute for me to be reminded of what this game is about. At a nearby intersection, a zealot-filled pickup truck mindlessly ploughs its way through traffic in its determination to run me down. I take them out, only to be headbutted by a wild turkey, which I struggle to shoot in the long grass. By the time I’m done with it, another truck nearly barrel-rolls to get at me, but this time I’m backed up by friendly units who happen to be nearby. At some point, a bear joins in and tears everyone in sight to pieces.

It’s hard to stop and soak in your surroundings in Far Cry 5, and most of the time it feels like a very scenic random encounter generator. Tales of enraged animals clearing out entire outposts impress from a distance, but the series has been doing this for years now. By the time the credits roll, these encounters become so persistent that they eventually lose their gravitas. The unpredictability becomes predictable, and you increasingly find yourself trying to quietly sidestep the chaos. 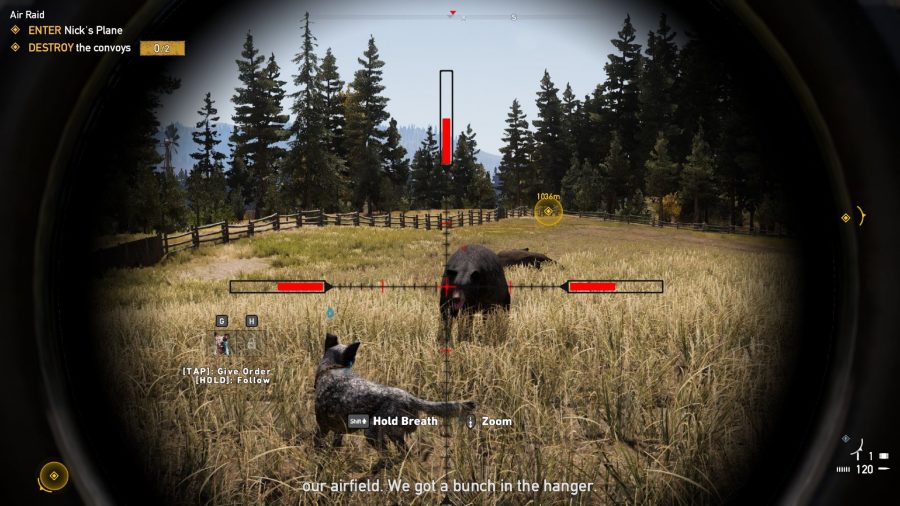 The series hasn’t always been so reluctant to slow down and actually build an atmosphere – a sense that you’re in a formidable, wild world rather than a sandbox. Far Cry Primal is at its best when you turn off the HUD and ignore the mind-control eagle that you can use to scout out enemy camps. Tracking down a legendary Bloodfang Sabertooth by following its footprints through the night, the moonlight dispersing its glow through the volumetric fog, and the suspense of knowing it could maul me in an instant is the most captivating the series has been in years.

Far Cry 2’s open world is similarly brutal. It forces you to engage with it and even connect with its relatively shallow characters. You’re plagued by malaria throughout the game, having to take and maintain a stock of pills to stop it overwhelming you, your health doesn’t recover automatically, your guns jam, and you have to pull bullets and shrapnel out of your flesh to avoid bleeding out. Your buddies, who show up mid-battle to save you, can themselves die forever. Even the physical in-game map that you read while driving a jeep one-handed across the savannah pulls you out of your usual gaming comfort zone, in turn pulling you into the game world.

I’m not saying Far Cry 2 represents the series’ halcyon days and that we must return to its fastidious brand of survival gameplay, but what it lacks in animal variety and random chaos it makes up for with design decisions that ground the player. It creates weighty situations that more recent outings seem to only be capable of achieving through slick cutscenes and charismatic villains. From its physics to its encounter designs, Far Cry 5 feels like the most weightless game in the series, and when you do finally find yourself face to face with its Koresh-inspired villain it’s jarringly sincere. 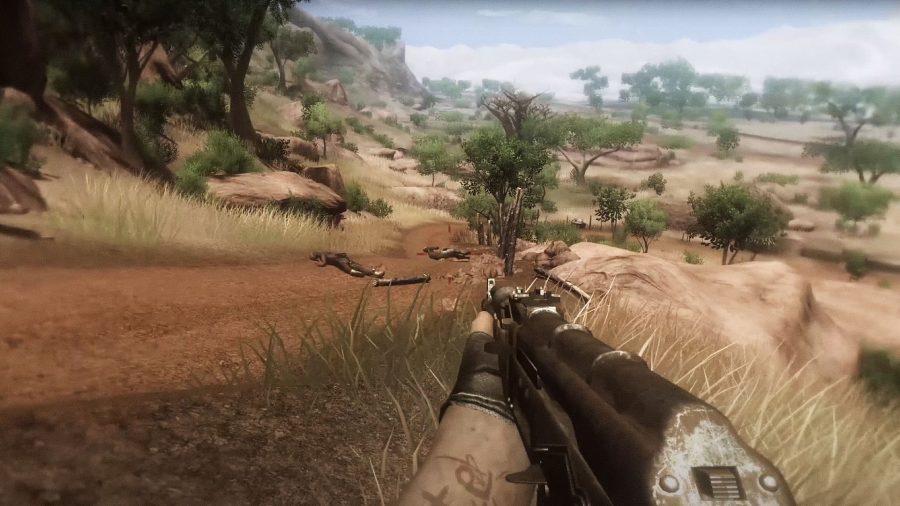 There’s a compromise here somewhere, where Far Cry 6 can still retain the glorious destruction from recent outings without making every encounter feel so inconsequential. Instead of sending wave after wave of enemy trucks at me, send one truck filled with smarter enemies. A bear sighting in the wilderness should be a big moment, not a throwaway fight that happens every few minutes.

I’ve been having a lot of fun revisiting Far Cry 5 (especially playing it in co-op), but it feels like a game that’s stretched a certain formula of systemic silliness to its absolute limit. It brashly represents one side of what Far Cry has always been about, its animalistic id, but it overlooks those intense, quiet moments that have stuck with me over the years. Far Cry 6 needs to bring the two elements together, or risk losing a precious part of the series’ identity.

For more on Far Cry, you can check out our Far Cry 5 review or take a look at our roundup of everything we know about Far Cry 6. And if all this talk of toughing it out in the wilderness has got you thinking, then our list of the best survival games on PC might offer up some alternatives for you to try out.