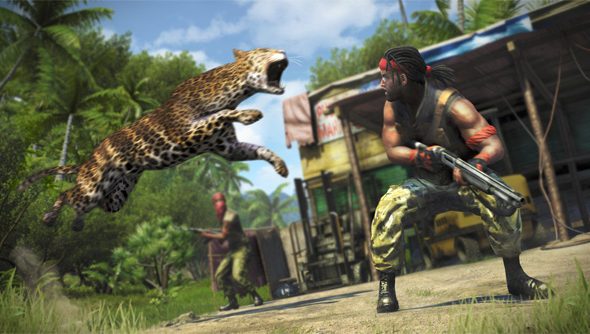 Now, let’s get this clear. I’m not claiming that, of everyone attending the Eurogamer Expo, I was the best at playing Ubisoft’s open-world, tropical island FPS. I’m sure others did much better than I. What I can tell you, though, was that I was the best Far Cry 3 player that I knew of, over all four days. Here’s a list of the mistakes I didn’t make as I played through the demo.

I didn’t do this once, no sir, not at all. Unlike one frustrated gamer, my response to finding a roadblock ahead of me wasn’t to spin the wheel and send my vehicle straight into the drink, before my floundering form was peppered with bullets.
No, I drove fairly well, making liberal use of the handbrake to get myself around corners in a roguish, rakish style. The jeeps handled a lot better than the quad bike, I noticed, and when I took a short trip in a glider I avoided plunging that into the drink too. Discretion prevents me from divulging the names of any of the gamers who did.
I didn’t get eaten by dogs
That said, as I was rooting through the wilderness, I did see some enemies attacked by the hungry animals. They went down pretty damn quickly, and it wasn’t long before the animals came at me. It turns out that firing a gun at dogs that are charging towards you is surprisingly difficult, though it was made a little easier by the multitude of mods I’d clipped on to my weapons. A nice old lady back in town runs a small shop that sells absolutely nothing but horrifically powerful guns, even though very few of the locals seem to be armed or display any signs of motivation. It must be the heat. I didn’t draw great bodies of enemies to my position
I was a subtle fellow, sometimes sneaking around enemies that I’d spotted, other times outrunning them. Getting caught up in a protracted gunfight wasn’t a good idea, as it would often draw reinforcements in, reinforcements that were oddly homogenous in nature.
In the world of Far Cry 3, every bad guy dresses exactly the same and owns the same model of jeep. I suppose I can understand the latter, as it’s a pretty good jeep, but it baffles me why many of them carry ammunition for weapons they don’t use and all have between one and five dollars in their pockets. Doesn’t mercenary work pay well?
I didn’t take any drugs
Though the odd bullet did nick me here and there, I had no need to ram a needle into my arm to fight back the pain. Watching other people play, this was a sight I saw many a time, but I was spared the indignity. Instead, I merely harvested drugs, walking into the jungle and chopping away at a variety of the plants I found there.
I didn’t shoot the friendly guy, but I did something much worse
Unlike some players, I felt no desire to put bullets through every person that I met. Instead, I peered at the friendly guy through the optical sight on my very posh, very sexy-looking bow, which I’d earlier used to shoot a dog. I felt a bit bad about that, and when I leant down to try and pet the dog I accidentally ended up skinning it instead.
I now assume someone, somewhere wants to trade dog skins with me. I don’t think I want to meet that person.
I didn’t fall off a radio tower
Honestly, who falls off a radio tower?
I didn’t feel very threatened
I suppose that’s a good thing, right? It’s all very green here and the weather’s quite perfect. It’s a shame to spoil this sunny day with such bloody brutality, to shatter the silence with the sound of gunfire, but the game needs some sense of danger.
Providing I didn’t stand there, firing an AK-47 into the air until half a dozen jeeps disgorged a clone army my way, I could happily potter about, rooting and looting my way about the land. I can only assume that things get both more dangerous and more varied as the game progresses. For now, it seems like a pleasant and passable FPS experience. Except for the whole dog skin thing.