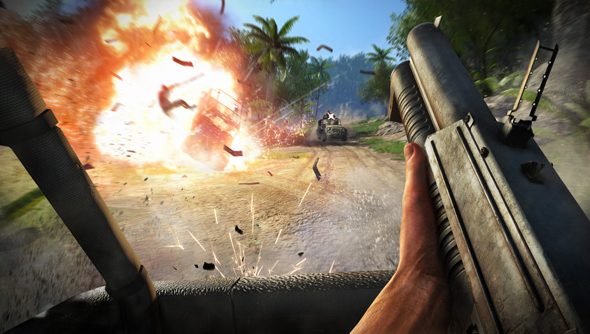 Far Cry 3 is my game of the year, even though it gets a few things wrong. For example, some people said it was a little bit racist, and then the writer defended the game by saying it was a satire about racism, which is indistinguishable from being racist apart from you keep turning to an imaginary camera and doing winks. In the process a very interesting discussion about writing ensued (I presume, I had to stop reading as I haven’t yet finished with the game’s story). But that’s not my main problem with Far Cry 3, my game of the year. Here is my main problem with Far Cry 3.

My main problem with Far Cry 3 so far, personally, is that I don’t like any of the game’s cacophonous gaggle of preppy, white, Californian trust fund wankers on gap year. Again, I think that’s supposed to be the idea, but I’ve definitely passed the point in the game at which I’m supposed to stop hating the protagonist and start rooting for him. I’m still running him off cliffs and swimming into sharks’ mouthsevery time he answers the phone with the pained, whiny cadence of a teenager whose justbeen told to clean his room. And that’s justthe main character. You spend most of your time trapped inside that man’s face, looking out at a world that actively loathes you.The others charactersare either worse, or fail to register at all. There was a wonderful moment in a cave in which, before I could proceed,I had to comfort my girlfriend by clicking reassuringly on her face and shoulders. But I couldn’t tell which girl that was supposed to be. Was it the boat-repairing girl? She seemed too busy fixing the engine of what she repeatedly insists is the only boat on the entire islandto be my character’s girlfriend. So I clicked on the other girl sitting on a wet rock and looking a bit sad. Ding ding! That’s her. There we go, strange lady. Have some comfort, courtesy of my manly clicking. Her name is Sandrabelle, Barbaroo, Cassaleila or a woman’s name that I forget.

Bad guyVaas is amazing though. The game’s mo-cap tech crosses with the actor’spowerfully unhinged performance to create one of the most unsettling villains in games since Baron von Blubba. What’s stranger is when you watch Michael Mando’s real-life performance and see just how accurately the game’s captured the guy. It’s uncanny.

Still, I’d rather abhor(with exception)a cast of characters than feel indifferent to them and, hateful bunch though they may be, I am enjoying Far Cry 3’s trope-addled and patronising to the edge of cartoonishly racist storyline. It attracts scrutiny only because it falls short ofthe world this team’s created. It’s one of the handful ofplots in blockbusterin’games even worthy of scrutiny, which is an achievement.Ubisoft done good.

I’m sure I’ll find more to dislike as I play (not the Skrillex bit though,I enjoyed the Skrillex bit), but everything that’s not the stuff I’ve just mentioned is majestic beyond comparison. Far Cry 3’s is a world I enjoy being in, one that continues to surprise me with striking natural beauty. That sounds like rhetorical praise, but the locations are elusively scenic, impressive in the large and small scale. I don’t see the edges in Far Cry 3, I can’t see where boulder_mid_078.mdl ends and the sprawling tropicalterrain begins. It’s cohesive and hand built. I’ve spent most of this Game of the Year post talking about what irks me in Far Cry 3, because that is how you treat the things you love. You focus relentlessly on their flaws while allowing those shortcomings to eclipse that which drew you to love the thing in the first place, until the faults are all you can see when you wake up in the morning andbefore you go to sleep at night. You become obsessed with the rarenegatives, affording them undue precedence in your brain, amplifying themuntil the illassociation becomes poisonous and irreversible, visible in every nuance of your interaction with the thing and you have to break up with it to play other gameseven though you know that’s probably a mistake.

Luckily that hasn’t happened to me because my love for Far Cry 3 is pure. It is pure because this is a screenshot of Far Cry 3.