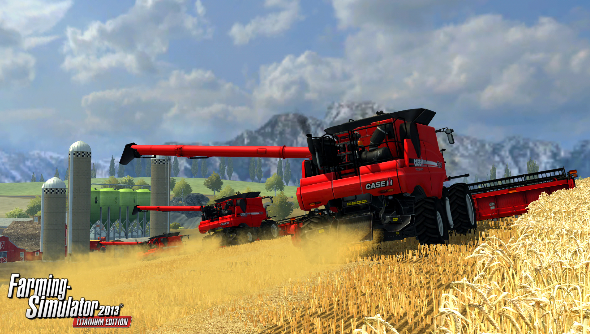 The badge ‘Titanium edition’ just screams “the best of the best”. If you’re a petrol head, you’ll know that Titanium is the highest trim level you can get on a Ford. For those into male grooming, you might defeat stubble each morning with a Quattro Titanium razor. Closer to home, OCZ offer Titanium edition RAM for enhanced bandwidth. We can now add a new name to the list of Titanium badge holders: Farming Simulator 2013. This is crop cultivation taken to a new level, baby.

If you thought the jump to consoles for the agricultural game was a hard-core leap, you’re about to be bewildered by its next move. The Titanium expansion doubles the gameplay area available to digital farmers, and offers up 150 different vehicles and plant machinery. But the major new element for Titanium is that you’ll be able to farm in the land where bigger is certainly better: the US of A. Bigger fields, bigger wheels, bigger yields; this is farming at its most extreme.