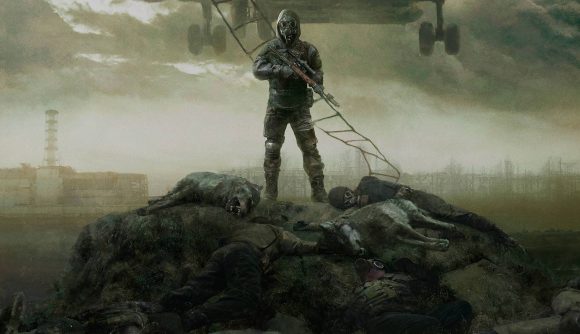 There are few crossovers in videogames that would make sense and actually work. Imagine Doom and Hearthstone – what kind of a mess would that result in? A bloody one with mana points scattered throughout, presumably. But, hey, we’re getting distracted. Get your teeth around this idea: PUBG meets STALKER. That is essentially what Fear The Wolves is.

Yes, that means 100 players are thrown into an arena. And yes, only one of them (or one squad) can be declared the winner at the end of it all. But there’s more going on here than your usual battle royale game. The STALKER influence comes from the setting: Chernobyl. The idea is to escape from the radiated wastelands before one of its mutated beasts and horrific anomalies make you part of the decay.

Aside from the other online players, then, there are wolves and other creatures to avoid as you try to survive. You can jump in vehicles and make a beeline for an abandoned camp in hopes that the threats lessen. But you’ll have to bear in mind that other players will hear the noise you make, not to mention the pockets of radiation, which spread across the map unevenly and can suddenly make any part of it deadly to be in.

What also makes Fear The Wolves different to its competitors in the genre is the fact that spectators – those that have been killed during a match – get to vote on the weather that the remaining survivors will endure. It’s worth watching matches until the end, too, as those left alive battle for a seat on a helicopter, bringing them all into the same area for a final fight.

Fear The Wolves is currently on Steam Early Access and so the developer is taking feedback on board to improve the game. There’s also a clear roadmap of what will be added to the game over the coming months – including weapon customisation, new horrible weather, extra locations across the map, and new mutant mechanics.

If you want to check it out you can purchase it on Steam already. But we’re giving away 30 Steam keys that will unlock the full game so if you’re patient or strapped for cash you should enter our giveaway. You can do so via the widget below. Every action you complete is worth one entry, too, and you’re allowed to enter several times – increasing your chances of winning.