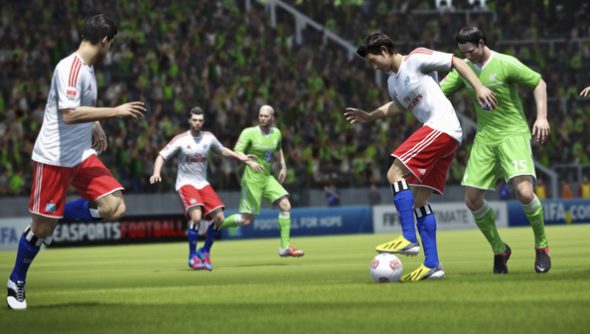 Front and centre of last night’s Xbox jockfest was Ignite, the appropriately inspirational-sounding engine built to power the next generation of EA Sports games, including the new FIFA. Oh sorry, did I say the new FIFA? I meant the new FIFA on Xbox One and PlayStation 4. FIFA 14 on PC will run on hamsters, or something.

FIFA’s PC ports have long been the lame pups in the litter, limping along behind their siblings year after year. Things seemed to have changed for the better by FIFA 12, however, by which time EA had kindly deigned to offer PC gamers the same game as everybody else.

Here’s what we could’ve had:

At Microsoft’s event, EA Sports exec Andrew Wilson said that Ignite would infuse FIFA with “human-like” player intelligence, “ten times greater” animation fidelity, and more accurate environments. I don’t think we’d have minded getting any of that, do you?