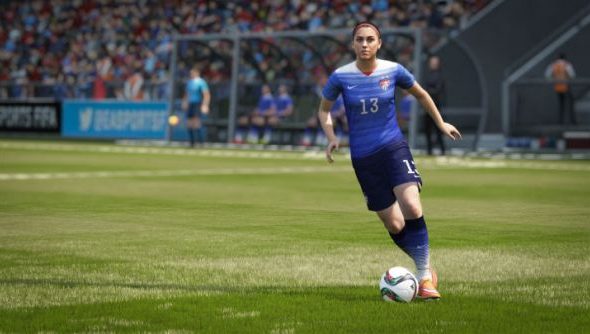 In a rare bit of FIFA news that doesn’t come courtesy of the FBI, EA have announced that the venerable football series’ next iteration will be the first to incorporate female national teams. 12 mo-capped squads will appear in the game, including those of England, Australia, France, Brazil and the US.

“Bringing some of the best women’s players and teams in the world to our franchise is a massive event for EA Sports, and we are equally excited about bringing millions of fans a new way to play,” said EA Sports boss David Rutter.

“We’re making sure fans get an authentic experience when playing with Women’s National Teams thanks to our innovative player capture and reference tools, as well as the sophisticated gameplay platform which we will continue to innovate on in FIFA 16.”

Rutter and his team have fielded petitions for lady players for yonks. To meet demand, they rebuilt their animation rig for female proportions and flew their mo-cap specialists around the world to capture the facial features of top players. Everything from fundamental player movement to celebration animations has been comprehensively reworked.

Female teams will play each other in various modes – including Kick Off, online friendlies and offline tournaments.

FIFA 16 comes to PC in September. Are you a fan of the 22-year-old digital ballsport?