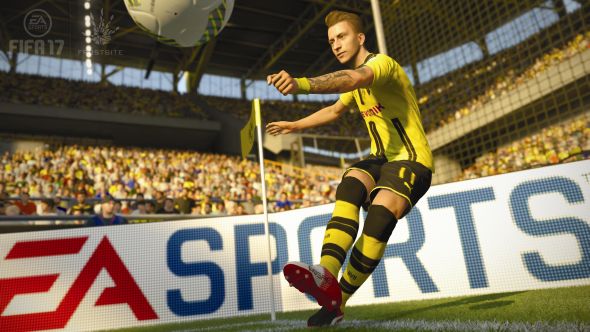 Some FIFA players have taken advantage of a serious, real-life injury to make themselves a bit of extra virtual cash in the game’s popular FIFA Ultimate Team (FUT) mode.

If you play games for the realism, check out the best simulation games on PC.

Ryan Mason, Hull City’s club-record signing, clashed heads with Chelsea defender Gary Cahill in a premier league game at the weekend. It was a pretty brutal bit of contact, resulting in a fractured skull and a trip to surgery. The BBC reports that he is still in hospital, but making good progress.

Some FIFA 17 players reacted to this news by buying as many copies of Mason’s card as possible, then relisting them at an inflated price. The assumption is that the headlines around Mason’s injury will lead to a surge in demand for his card, upon which they can capitalise. According to Eurogamer, Mason’s price jumped from around 400 FIFA coins to between four and five thousand within a couple of days of his injury.

Dubbed ‘price-fixing’ by the community, this happens whenever there’s a perceived increase in demand for a player, for whatever reason. At best, it’s exploitative and can price poorer players out of an otherwise sound purchase, but the fact it’s happened in the wake of a serious injury has sparked outrage on the FIFA subreddit.

Those who defend the practice argue it’s a perfectly fair and natural result of the kind of market that exists in FUT, and that it doesn’t do any real-world harm. Critics say it’s distasteful to profit from such unfortunate real-world events, even if only in a game, and it’s pretty easy to see their point.

FIFA Ultimate Team is a game mode within FIFA in which you build a squad from all players in all leagues, competing against other players’ attempts to do the same. As your team succeeds, you progress through the divisions and earn coins, with which you can buy new and better players.