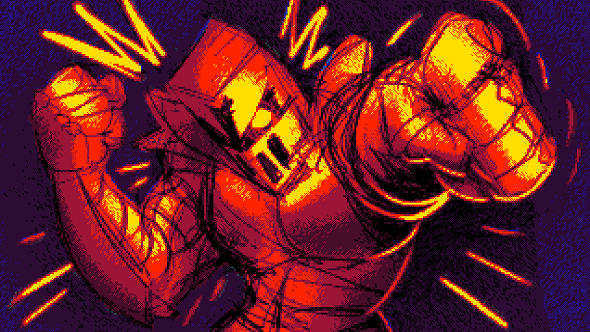 Have you ever played an old-school dungeon crawler? You know, one of those first-person games where you move one grid at a time through tight corridors, searching for keys and striking down skeletons with a gleaming sword. Fight Knight is that, but with fists.

Check out our list of the best indie games for more novel ideas.

In it, you play a champion who, for some reason, refuses to take up arms. He will take his arms and throw them at your face, however – especially if you’re a hell-beast. Gameplay is a mix of traditional dungeon crawling and a real-time fighting system filled with ducks, weaves, dodges, hooks, jabs, uppercuts, and crosses.

The fighting plays out at high-speed, so it looks like quite a contrast when you come up against something to punch in the face. Will you be able to punch your way to the top… of the tower… filled with skeletons?

The game is currently on Kickstarter, but there’s a demo you can try right now on itch.io, and it’s almost funded already. Check out the Fight Knight Kickstarter page to grab the demo or back the project. There’s a trailer above to get you in the mood.