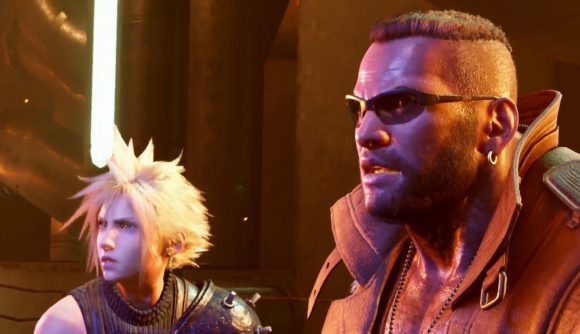 Square Enix has given an in-depth look at how combat will work in the Final Fantasy VII remake. The new version of the game will feature a hybrid system combining real-time fighting with more strategic command-based action.

A lengthy demo during the publisher’s Square Enix conference confirms that ATB (Active Time Battle) will return, and, once your meter is full, you’ll b able to enter Tactical Mode, which pauses time and lets you choose commands from a menu.

You’ll be able to switch between characters at the touch of a button. While Cloud uses his sword and various spells, Barrett has a very different fighting style. Even when you’re not directly controlling a character, however, it’ll still be fighting by your side, and you can issue commands to dictate the way your allies play.

This story is still developing and will be updated soon, as PCGamesN works to bring you the fastest, but also the most thorough, E3 2019 conference coverage. If you’re reading this, the show is either still live or has only recently concluded, so please check back soon for further updates, information, and analysis.

Welcome to PCGamesN – your one-stop-shop for the best, fastest, and most thorough PC gaming news coverage this E3. We have staff in our UK office and on the ground in Los Angeles who are working hard to bring you the best reporting on the internet on the biggest and most exciting week in gaming news. Whether it’s breaking announcements from the conferences, or follow-up questioning, hands-on impressions, and hot takes from the show floor, you need look no further.