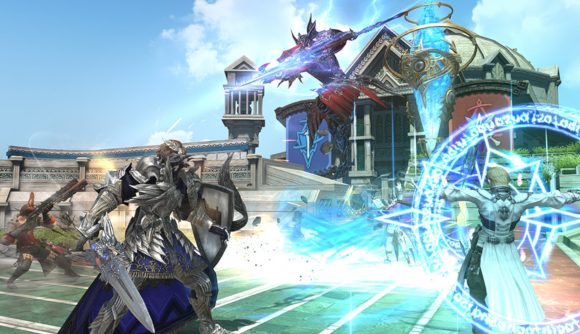 Final Fantasy XIV PvP is finally heating up thanks to the popularity of Crystalline Conflict, but the devs want you to know that you can still be banned for “uncooperative” or “lethargic” behaviour. That means no spamming “nice job” when your team is losing and no setting off fireworks on top of down opponents. In other words, Yoshi-P says ‘don’t be a jerk’.

“Participants must bring their best to the fight, and for this reason uncooperative or lethargic behaviour is prohibited,” director and producer Naoki Yoshida says in a new blog post. “Let’s strive to do our best even in situations where defeat is imminent, regardless of whether or not you’re interested in the rewards.”

The new post outlines the “main types of prohibited behaviours”, which include things like “repeatedly using the quick chat phrase ‘nice job!’ during a disadvantageous situation,” ”using and repeating an emote on top of a downed opponent,” and “setting off fireworks on top of a downed opponent,” in addition to things like direct harassment in text chat or on social media.

Violations can net offenders a temporary suspension up to 20 days, or a permanent ban in “exceptionally heinous” cases. This is all pretty standard stuff, but it seems we’re still at a point where online game players need occasional reminders about the definitions of ‘being a jerk’. At least the FFXIV devs are exceptionally polite about it.

The post does not, however, address cheating in any way, even as players have been noting some prolific cheats in PvP. This is not a new problem for the MMO, but the popularity of Crystalline Conflict has made it much more obvious.