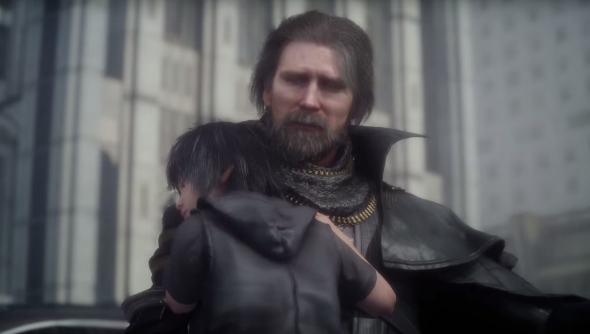 Square’s new Luminous Studio engine has been used as a bit of a showcase piece for DirectX 12, demonstrating the graphical prowess Microsoft’s new system provides. That power is very apparent in the new trailer for Final Fantasy XV, Square’s upcoming game built on the engine. It features a lot of exception hair, on both head and face.

For a Final Fantasy XV trailer it’s surprisingly glum, replacing the core cast of jumping One Directioners-with-swords for a rainy scene complete with mourning father and son. But boy, does that father have the most magnificent beard we’ve ever seen.

There’s also some lovely fur on a dog, who runs through a puddle-ridden street struck by beautiful lighting effects. Basically, it’s a really good looking game.

Of course, we’re not getting it at launch. Or perhaps at all. So far it’s a console exclusive, as with all Final Fantasy games bar the MMOs. However, with the push on DirectX 12 and the recent trend of Square Enix bringing all the Final Fantasy XIII games to Steam, there’s hope that we’ll be able to play Final Fantasy XV at some point in the future.