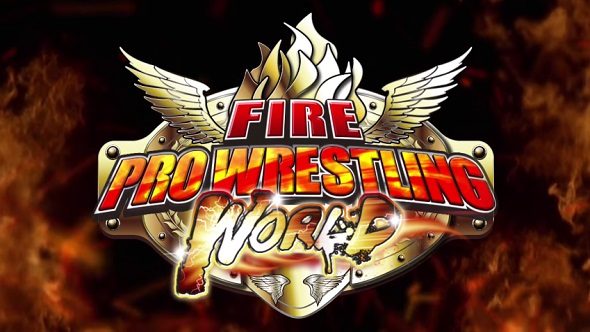 Returning to the ring for another shot at the title belt, Spike Chunsoft are bringing back classic arcade grappler Fire Pro Wrestling, with an updated edition for the modern age of wrestling. Titled Fire Pro Wrestling World, the latest installment of the series promises “unlimited customization” for fans of big men fighting each other.

The main draw of Fire Pro Wrestling World is online wrasslin’, where players can organise leagues, exhibition matches, championship bouts and battle royales with other wrestlers from around the world. Alongside your standard Deathmatch and Steel Cage bouts, players can set up fights with MMA rules, barbed wire fences, no holds barred “Gruesome Fighting” and even matches where the ring is littered with landmines. You can probably set up for a mighty choke slam if you bounce someone into a landmine.

Similar to most wrestling games, you can craft your own unique wrestler in Fire Pro Wrestling World, with “over a thousand devastating moves” to choose from according to the Steam page. You can customise the ring, the mat logos and the referee if you want, with Fire Pro Wrestling World’s robust AI system allowing players to choose how certain computer wrestlers will perform. Much like real wrestling, you can set up specific scenarios to heighten the tension and make for explosive fights. I can’t wait for the eventual PCGamesN Wrestling League, with all the staff having their own outfits, finishers and intros.

Fire Pro Wrestling World is set for launch on Steam Early Access sometime in Q2 of this year. Start practicing your promos and swanton bombs for then.