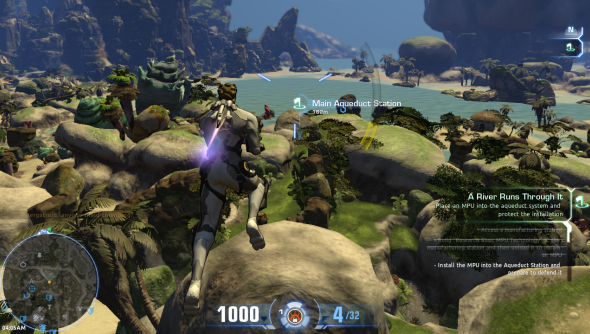 The weather at Copacabana is beautiful. The scenery is marvelous. The wildlife can be a little bitey though, so I’d recommend anyone taking a trip down to the seafront follow the example of the locals. Bring at least two firearms, a solid battleframe, some explosives, possibly a jetpack and definitely a good beach towel.

Firefall isn’t like other MMOs. It’s a twitch shooter. A twitch shooter with jetpacks, monsters, a free-roaming open world and a PvP mode that plays like Quake in third person. It’s also kinda brilliant, kinda inspiring and entirely free-to-play.

It starts in Copacabana: a small but safe tropical resort. It’s a blue-lagoon paradise, where the sun rises and sets, waves lap at the shore, and you can practically taste the cocktails. Gorgeous; just one little town in Firefall’s languid open world. Step outside it’s walls, though, and things change. Bugs roam the sands, enormous reptiles lurk among the rocks and giant bulging sacs give birth to even weirder beasts.

So you shoot them. And they come running.

So you shoot them again, constantly, furiously. And you die, overwhelmed. What the hell?

Firefall plays like and is a first-person shooter. Your life depends on your ability to twitch aim and strafe your way out of danger. This is a very good thing.

Your first hour is spent questing – jetting up and down the beach searching for parts and tools for an engineer back at Copacabana. It’s nervy and fast paced, enjoyable if only because it’s so unique.

But it’s a free-to-play MMO. With character classes, XP, upgrades and perks. There are four character classes, each defined by their ‘Battleframe’ – the suit of armour you wander around the beach in. Your starting class, be it Biotech (healer/poison hybrid), Engineer (turrets), Recon (sniper), Assault (rocket launcher) or Dreadnaught (heavy), provides a basic template, but as you develop you’ll gradually grow into an increasingly distinctive character, spending your experience points on suit and backpack upgrades that unlock buffs and abilities and new weapons.

More advanced abilities allow you to craft your own upgrades, further customising your character, but there’s a limit to the amount of upgrades you can unlock. If you fancy a change, you can always try on another battleframe, developing this one along different lines, and during your downtime you can swap between them as casually as if they were t-shirts. Building your own gear is an important part of battleframe customisation, as many in-game merchants only sell Nanoprints for items, requiring you to collect the appropriate materials and then do the job yourself. It’s an exceptionally smart system – giving you a single character that can play multiple classes.

Right now, though, the quests run out relatively quickly. Which comes to Firefall’s leading frustration: the rest of the world. Firefall’s in beta right now. And despite being in beta for so long, and accepting early payment for ‘founders’ membership, there’s just not much here to do. When the quests run out, you’re left to fight in PvP (although the queues take way longer than you’d expect), go Thumping, or wait for a dynamic event to hit.

Thumping is the game’s first weird saving grace. It’s a mini-game built around crafting. You need to mine materials from the world by dropping a Thumper from the sky. You need to defend it while it does its work, and then send it firing off into the sky. Defending a thumper is a team effort: engineers hop in with turrets, snipers take to the high-ground, heavies maintain the line. It’s fun and compulsive – if you find a good group, it easy to spend an hour roaming the map as a pack well before you get bored.

The second saving grace? The dynamic events. As the sun set over Copacobana as we played, a hurricane hit – a vile mass of swirling wind that spewed bugs and insects. It was the Firefall equivalent of an open world raid boss. To defeat it, players have to kill the wave upon wave of insects, then the rocks that rotate within the pipe, before finally killing the core. It’s a riot, topped off with an explosion of loot, experience and resources to spend on new gear. I want Firefall to succeed: I think its potential is nearly unmatched. I love its world, I love its setting, I love its ambition and I love its style. But the developers, Red 5 have so much work to do. It needs more quests, more space, more area, more monsters, more bosses, more weapons more everything.

Most of all though, it needs more players.

Now’s the time to jump in.