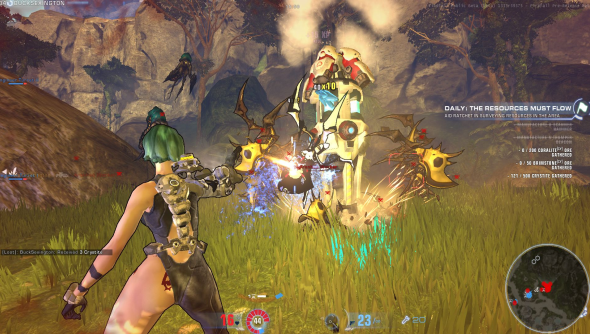 I gave Firefall a 4/10 when I reviewed three weeks ago. I thought the action was a repetitive grind and I spent far too long walking between missions. I also found that it didn’t foster much interaction between players, a lot of your time was spent solo and the missions simply didn’t require buddying up.

Well, Red 5 have solved a great many of my gripes in a single patch, fixing some deep flaws in the launch version. I’ve spent all morning playing and if you were on the fence about creating an account this could be enough to get you hooked.

Let me explain why.

The biggest change the patch has seen is a significant increase in “the amount of dynamic event spawns in Sertao, Broken Peninsula and Coral Forest.” Dynamic events can be anything from an alien strikeforce attacking one of the human outposts, a crashed ship that needs to be repaired, or newly discovered mineral vein that needs to be mined before the local wild animals destroy it. These events appear in the world and are flagged up on the map for all players to see. They have high rewards and draw in folk from all over to pitch in.

Dynamic events are what, in theory, set Firefall apart from other MMOs but when I played earlier this month they were few and far between. There are now so many more going on at any one time. When I booted up this morning I could see five within a minute’s walking distance of my spawn and throughout my play session there was always something going on that I could take part in.

Not only was I taking part but I was helped by a load of other players, too. It gave Firefall the sense of community I found lacking before. We weren’t talking to one another but jetpacking over someone’s shoulders to shotgun the alien that was about to devour them is a sort of conversation, isn’t it?

There’s a good deal of variety in the events I saw, too. That may grow stale eventually but so long as they’re in a healthy rotation then it should keep you entertained for a couple of weeks. Hopefully Red 5 can add new events into the mix with relative ease.

Red 5 have also increased the charge rate for your Hyper Kinetic Module. Basically, the HKM is an ultimate ability that causes a blast of AoE damage and it’s always fun to use. The problem before was that, because it would only charge up in combat and fights rarely lasted long enough for it to fully energise, you rarely got to activate it. With it now charging up faster (and keeping charge for longer) means that you can use it more frequently.

While some of my original criticisms haven’t been addressed in this patch – unbalanced crafting, long walks between missions, grindy mission objectives – I’m surprised by how much of a difference increasing the number of dynamic missions has made. There’s so much more going on in the game world than there was before.

If you were on the fence about Firefall now’s a good time to test it out and see if it’s your sort of thing. I would recommend taking a friend, though, as it can still be a little lonely out there.