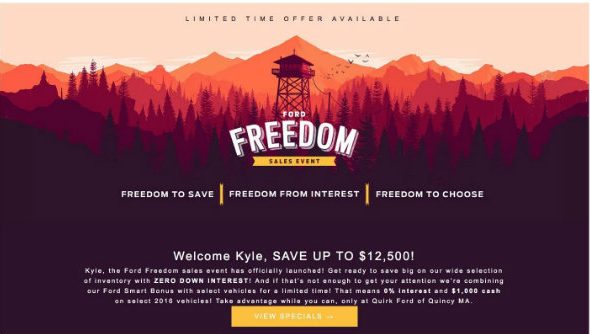 Update Jun 28, 2016: Quirk Auto Dealers have apologised for using Firewatch art in their ads without permission.

In a tweeted statement, the Ford dealer that used Firewatch art in its marketing materials without permission has apologised for doing so.

For more arty and lovely titles, check out our list of the best indie games.

.@Ford was not involved in creating the Quirk Ford advertising. We regret the error and to would like to issue an apology to @camposanto

It’s been accepted by Campo Santo co-founder Sean Vanaman on Twitter. Earlier in the day he also tweeted that this sort of thing is more common than you might think, saying that “Olly [Moss, artist at Campo Santo] and his contemporaries get yoinked 100x a day.” He also refuted claims that the image was found via a wallpaper website.

Original story Jun 27, 2016:Official Firewatch artwork has seemingly shown up in a Ford advert sent out by email, and Firewatch’s artist is a bit surprised.

The advert apparently showed up in an email, which was shared on Twitter by Firewatch’s co-producer.

Olly Moss, Firewatch’s lead artist, has responded to the advert on Twitter, claiming to have no knowledge of Ford seeking permission to use the art.

@BeefythePaladin yes and of course not.

Some are reporting that the email campaign was tied to a single dealership -specifically a Ford dealership in Quincy, Massachusetts. Game Informer called the branch and spoke to a spokesperson in their advertising department.

“I guess that whoever made the email blast must have grabbed it from the website or something,” they were told, before being hung up on when they asked about their official process for sourcing artwork.

The Firewatch team do seem to be having a bit of fun with the situation at least.

Working on our next email blast pic.twitter.com/PBZ6DsPW2x

We’ve contacted Campo Santo for a statement and will update if we hear back.