Firewatch? FILMWATCH, more like. That’s just a little joke in honour of a new movie deal signed between Hollywood production company Good Universe and indie developers Campo Santo. Together they’re working on a big-screen adaptation of the latter’s understated adventure game about a fire lookout in the Wyoming wilderness.

By great coincidence, on a hike shortly after the announcement, I came across a wad of paper stuck to a branch. It turned out to be an early version of Firewatch’s script – and we’re pleased to present these excerpts to you now. It’s my belief they silence any doubt that Campo Santo’s conversational story can survive its transition to the silver screen with nuance intact. But I’ll let the script do the talking.

In the beautiful orange haze of Wyoming’s national park, only the wind speaks. As the camera pans down from a sky filled with fluffy, idyllic clouds, it comes to rest on a lookout tower – the only man-made object on a horizon painted with peaks and the very tops of pine trees.

DELILAH (over radio): So tell me, Henry. Why did you take this job?

HENRY: I’ve banished myself to the wilderness because I have a terrible habit of oversharing. Here I can tell my secrets to the caves.

DELILAH: Well, they’re great listeners. So, ah, how are you?

HENRY: Not bad. Not as bad as my wife, Julia, who developed early-onset dementia at the age of 41.

HENRY: And I’m sorry to throw that one at you. Like the small physics objects I throw around my cabin every morning. I can’t stop.

DELILAH: Do you need coordinates for the nearest cave? 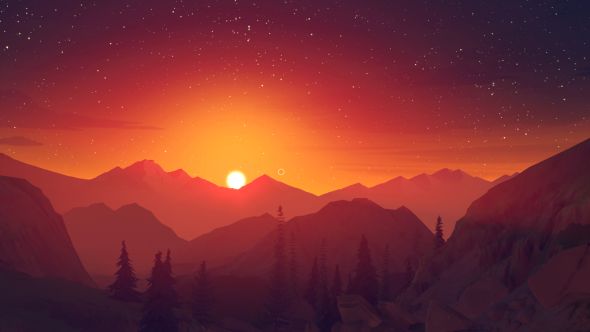 DELILAH: I don’t talk to the other lookouts as much as I talk to you, Ron. Not in the same way.

While traversing a rocky path, HENRY stumbles across a snapped cable. It is the lookouts’ only connection to home.

HENRY: Somebody cut the comms.

DELILAH: Are you serious?

HENRY: I’m out here, and the wire is cut clean through.

DELILAH: Wait, you’re not in your tower?

DELILAH: Then who is? 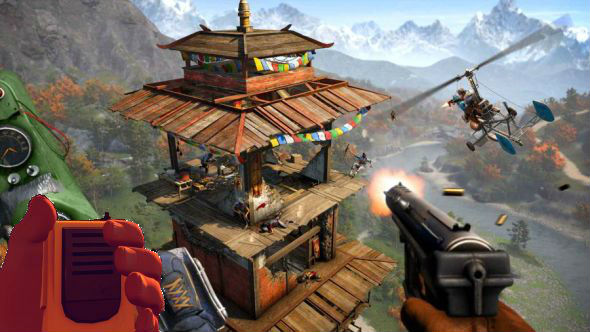 HENRY, halfway up a ladder, spits the knife from between his teeth before speaking into the receiver.

HENRY: I’ve captured Three Twigs tower. Minimal resistance. Pinned a raccoon to the lavatory door as a warning to Ron and the rest.

DELILAH: …You’re not joking, are you?

HENRY: We’ve got to take back Shoshone. Now, I need a location on that heavy weapons cache.

We follow HENRY as he squeezes through the high fence of a restricted area. He wears two clips of ammunition across his bare chest, carries another as a belt, and a fourth as a bandana. He tiptoes into a tent, where he finds surveillance equipment.

DELILAH: What. Henry? Seriously, none of the action happens in my neck of the woods. Spill.

HENRY: This is bad. Really bad. Somebody’s been watching us. 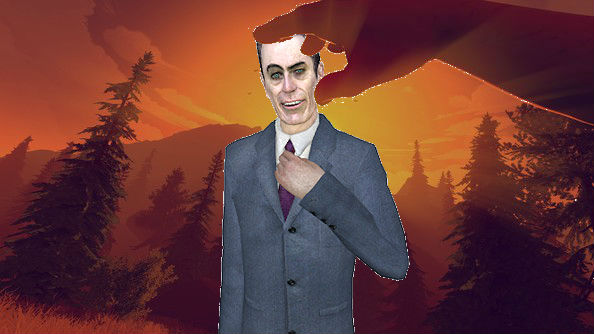 Fumbling entry into a tactical forward roll, HENRY crashes into the fabric wall of the tent. His head hits something solid.

HENRY: I knew it.

HENRY tears at the canvas, revealing concrete. Lettering stamped across the slab reads: AREA 52. He straightens up quickly as the barrell of an assault rifle presses into his back and a black-suited man steps into the tent, clapping slowly.

HENRY runs for the chopper and, under inexplicable amounts of gunfire, makes it. As the helicopter flies out over Shoshone forest, he peers down to see that a team of g-men have subdued and caged an enormous deer.

HENRY: Who watches the men who watch the firewatchers?

The buck has broken loose and gone on the rampage. Tom Jones’ Delilah plays as the credits roll.