If there’s one thing playing Firewatch hammered home to me, it’s that I absolutely suck at navigation. If you dropped me into the middle of the Wyoming wilderness, I’d end my first day as reconstituted “bear shit”, to borrow a line from Hank. I could barely use the in-game map without getting thoroughly lost every few minutes, so I’m not sure if I’m the target audience for these real-life Firewatch maps developer Campo Santo have just unleashed into the wild.

Even though Firewatch heavily funnels where you go, it’s a lovely little open-world. Here are some more of the best sandbox games on PC.

The studio has released two separate printable maps of Firewatch’s teeny but gorgeous open-world over on their blog, with both textured and plain versions available. The idea is to entirely forego using Hank’s in-game navigational tools in favour of getting your Bear Grylls on and psychically figuring out how to get from eery yet sumptuous point A to “what the hell’s that rustling in the bushes” point B using these maps. Witchcraft!

Campo Santo even suggest you use the printouts to indulge in a little impromptu co-op with a pal. “If you play games with someone next to you on the couch, print this out and hand it to them, and your formerly disinterested couch-sharer is magically transformed into an officially engrossed Firewatch Navigator and Map Scribbler,” Campo Santo co-founder Jake Rodkin writes on the studio’s blog. 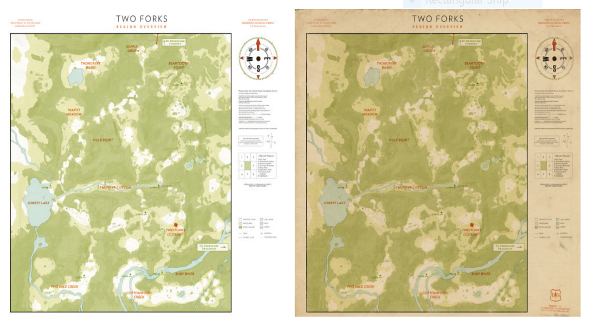 It’s a delightfully lo-fi way to fully immerse yourself in Hank’s banter-heavy outdoor adventure, no? I’d totally print off one of these maps… well, if I hadn’t finished Firewatch last night. I don’t even mind the resolution felt a little half-baked, because that was some goooood chatter.