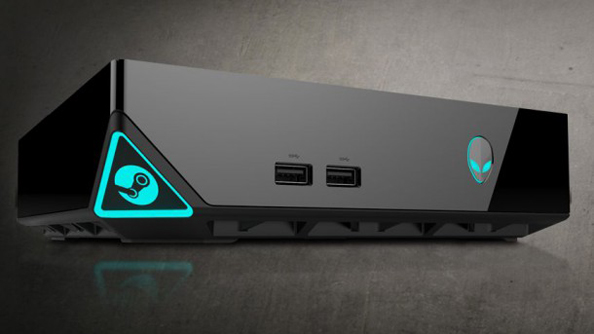 Since properly revealing its many forms at CES last week, the Steam Machine has captured the hearts and minds of the gaming population at large, auto-becoming the must have gadget of 2014, 2015, 2017 and 2019, and absorbing innovation awards from every corner of the mediasphere like a huge and unstoppable plaudit-sponge. I’m not sure if that’s even true, but Valve definitely partnered with a bunch of third party manufacturers and they definitely showed us pictures of all sorts of differently sized PC cases, each one more expensive and improbably shaped than the last.

But what is a Steam Machine, and what does it mean for the future of games? Genuinely I’ve no idea and I’m not going to condescend by claiming to have the sort of insight you’d imagine I should have after working in the games industry for the best part of a decade, so instead here are FIVE different kinds of shapes of Steam Machine I’d like to see become a reality. Coincidentally, that’s the same number of comedy shapes that I know!

Following a spate of crushings in the mid to late 90s, current EU regulations restrict the size of personal computers to around the dimensions of four large toasters balanced on top of one another, which is why you rarely see a PC larger than a smallish dog or largish cat. The Steam Machine manages to circumvent this ruling by virtue of nobody really knowing what a Steam Machine is or how one might be useful, so why not blast into this brave new supersized future by constructing a computer that’s perfect sphere, four hundred metres in diameter?

The Steam Ball is Linux-powered and smooth to the touch, with no obvious ports or buttons save for a mass of HDMI “hair” trailing from a metre square patch on its side. If the unstoppable and unknowable Steam Ball rolls through your town, simply connect a compatible device to one of the thousands of strands of HDMI cable to play one of eight Linux-compatible games. By unmooring themselves from the prescribed tyranny of Microsoft’s solids-biased Windows gulag, Valve and their partnered hardware companies are now free to create Steam Machines that occupy any one of the three basic states of matter. And when the wide range of form factors of modern PC components allow for graphics cards in the shapes of bongs and big Gandalf pipes, the next step in Steam Machine tech is obvious: a cloud of nano-machines that form a sort of sweet-smelling inhaleable gas, one that is percolated through parallel pipelines to provide a straight-to-brain, no-nonsense gaming experience. Chonk down a next-gen guff from this fat doobie and you’ll be teleported to gaming nirvana, where up to eight games Linux-compatible games await. Let your gamer friends know you mean business with a Steam Machine built into the shape of a skateboard. “The flatter the phatter,” you might shout as you kickflip your half-inch thick PC over a canyon, landing a perfect — and totally gnarly — 360 nosegrab ollie. “The only grinding I’m interested in,” you might then shout to your stunned buddies who, by this point in the sentence, understand the word ‘grind’ to mean ‘the repetitive and extended killing of lower level mobs in an MMO order to effect a level increase’, “is the kind of grinding you do on a skateboard! I also like the other kind, still!” Now that Intel’s latest range of hypertensile CPUs have given rise to the world’s first sub-millimetre thin and one hundred yard long processors, the door has finally been flung open to the possibilities of multi-core spools of yarn, Pentium jumpers and intelligent ropes.

By braiding these flexible CPU threads around a suitable GPU cable and flanking the resulting weave on both ends by specially lathed, wooden SDD handles, you could construct a rudimentary, six foot long Steam Machine skipping rope, the first of its kind, that when handed to an innocent little orphan girl would elicit a timeless rhyme. “A sailor went to sea sea sea, to see what he could see see see,” the orphan would sing as she skipped, a distant orphan sadness in her eyes, “but all the he could see see see, was the deep dark bottom of the sea sea sea“. As well as being the weakest entry in this list, the skipping rope would also allow the little girl to play roughly eight Linux-compatible games. 1. A part of a bionic dog sidekick

The first bionic implant happened in 1998, when Ray Kurzweil grafted a 32MB USB stick into his elbow, filled it to capacity with three illegally downloaded episodes of The X-Files and then hosted a TED talk about how by the year 2008 it would be totally okay to “do it” with a robot. That USB stick has long since scabbed over, but the bionic arms race (the race to graft as many bionic arms to ourselves as possible) has only been gathering pace.

You’ll no doubt have noticed that most small pets these days are partly bionic (if you bought a gerbil or a budgie in the UK in the last two years, it almost certainly is acting as a wi-fi hotspot), but more and more advancements are being made in the field of embedding useful electronics into ever larger animals. We’ve already got collies with built-in microwave ovens, Candy Crush compatible horses and Freeview cats, why not a dog with all of the component parts of a Steam Machine, capable of playing around eight Linux-compatible games? Why not indeed! What shapes and specifications of Steam Machine would you like to see? Maybe a liquid Steam Machine you could paint on to your living room wall, or something like that. Tell me in the comments below and we’ll soon find out how long this sort of joke can remain funny.