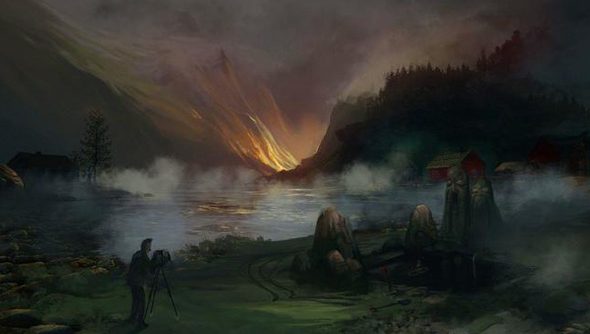 Surprise always tastes better as a chaser to that much sweeter drink, Nice. We thought Ragnar Tørnquist had formed Red Thread Games a year ago with the express purpose of making the Dreamfall sequel that never was, but what’s this? Another game: a first-person survival horror affair called Draugen.

Red Thread have continued their fruitful relationship with the Norwegian Film Institute, which allowed them enough funds last year to develop Dreamfall Chapters until it could be Kickstarted. This time, the NFI have given Tørnquist and co. $144,000 with which to build an adventure set in and around the fjords and mountains of the Norwegian west coast in the 1920s.

I’ve never played anything set there before, which might be reason enough for Draugen to exist. But there’s more: the promise of exploring a “tiny”, deserted fishing village in great detail, gathering clues and memories to uncover the truth behind an awful happening. Of course, we’ll also discover plenty else about the history of the place and its people, and come to a Wicker Man-like understanding that something is going on here.

Clearly there’s very little Red Thread are going to be willing to tell us about Draugen’s story at this stage – but we do know it’ll draw from a literary smorgasbord of Scandinavian books, legends and fairytales, as well as Norse mythology and Icelandic sagas. We’ll play as an American nature photographer and botanist – the perfect eyes through which to discover Norwegian national romanticism for the first time.

The obvious reference point is Gone Home, which took advantage of a similarly intimate space to expand on absent personalities and flirt with horror. Also Anna, but that turned out to be a bit rubbish.

“From time to time, a woman in black can be spotted in the distance,” write Red Thread. “Who is she, and what is her connection to this place? Who is the little girl singing broken lullabies as the sky begins to darken? And when night falls, and those last few, precious drops of kerosene in the lamp feed a fragile, flickering flame, what hides out there in the darkness and in the cold, black sea?”

Lovely fjords? I’m hoping it’s lovely fjords. Nevermind that Draugen, or The Draug, is a watery undead creature from Norse mythology. Draugen is currently in the works for PC, Mac and Linux.