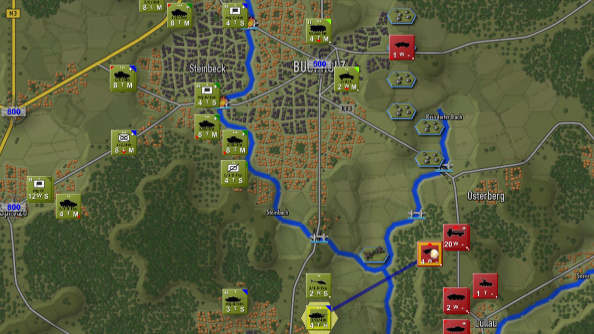 Flashpoint Campaigns: Red Storm paints – with hexes – a grim vision of an alternate 1980s where tensions between NATO and the Soviet Union have hurtled the world into a third global conflict, turning Central Europe into a battlefield. It’s an operational wargame where units from NATO and the Warsaw Pact flood the map while armchair generals concoct battle plans and use everything from electronic warfare to precision guided weapons to win the war.

With its follow-up, Flashpoint Campaigns: Southern Storm, due out this year, we spoke with Robert Crandall of On Target Simulations, getting the skinny on the next game in the series, and why he finds this ‘what if’ scenario so compelling. 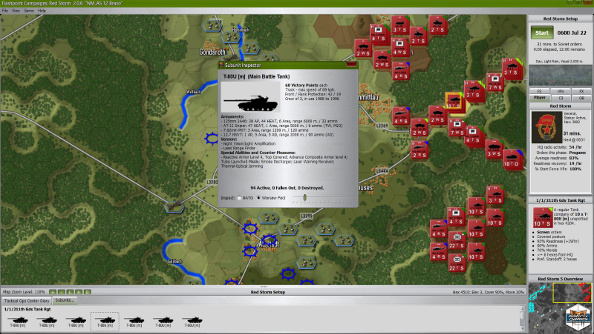 “The game is high intensity all the way,” says Crandall. “There are a lot of fast and powerful units spilling on to the map that have orders to do or die. This puts a lot of pressure on the player to perform or things will go very badly for him very quickly!”

And that performance relies on the geography, weather, time of day, the morale of troops, their supplies – it’s a long list and a lot of data to consider. Ultimately, though, all this planning leads to confrontations between units, from attack helicopters to troops on the ground.

“Scenarios typically involves a reinforced regiment or brigade attacking a reinforced battalion on a map that is 20km by 15km in a four to 14-hour time period,” Crandall explains. “The difference between a World War II game at this level and ours is the much higher tempo.”

Flashpoint Campaigns: Southern Storm shifts the perspective to the southern part of Central Europe, adding forces from new nations to the roster. East German, Czechoslovakian, French and Canadian units join those from the pre-existing countries, the USA, UK, West Germany and the USSR.

Crandall and OTS have prioritised increasing the number and type of units, as well as giving players greater control over them, modernising the UI and, importantly, overhauling the map along with the scenario and campaign editors to, according to Crandall, “allow more flexibility.” Attention is being given to the campaigns as well, with the goal of making them deeper and tougher. 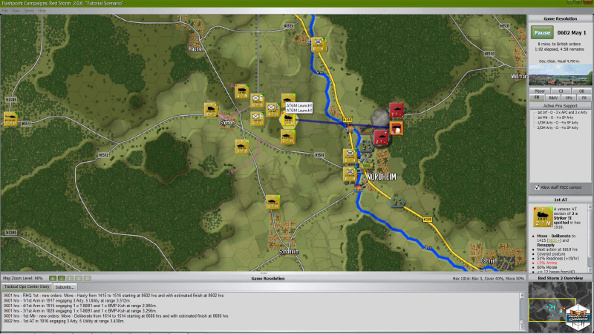 Despite the increased challenge, the Flashpoint Campaigns series is equally for new wargamers. “We really wanted relative newcomers to wargaming to be able to pick up this game and become immersed in it within ten minutes or so,” says Crandall. “As time went on we would then re-evaluate the models – line of sight, crossing rivers, moving through difficult terrain, handling air strikes, the effect of surprise – and make them just a little deeper and better as long as we didn’t make them so involved that they lost the original touch.

“We also rejected cool ideas that would just make things too complicated or violate the viewpoint that the player is the overall commander of the force and not the commander of each and every little unit. Sometimes you just have to know when to say ‘no’.”

For Crandall and OTS, the setting continues to be fertile ground and interesting for them to explore because the alternate history war once felt very close. “Everyone in our team lived through the Cold War and it was an ever-present reality in our lives. Three of us served in the US forces in Europe during that time, as did a great many others in many other nations. For the rest of us – including me – there were popular books by Tom Clancy, Larry Bond, Harold Coyle and many others that fired the imagination. The bottom line is that a lot of people still alive were very much involved with this confrontation for a significant part of their lives and many more were aware of it and followed it as a matter of course.”

The Cold War heating up isn’t the only scenario, what if or otherwise, that Crandall’s interested in exploring, however. He mentions not only post-World War 2 history, but even the future, along with contemporary conflicts in the Middle East. “There is a lot of military hardware distributed around the world right now that could see action in the right circumstances. We are interested in seeing what could be done with it. We expect there will be a lot more games in the years to come.”

Our ‘The World in Wargaming’ series is created in association with Slitherine. Flashpoint Campaigns: Red Storm is available now, and Southern Storm is due out later this year.