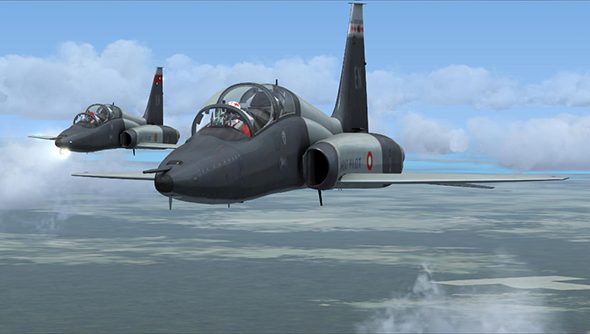 The much-anticipated multiplayer military flight experience, Saitek Combat Pilot from Mad Catz, has finally switched on its servers to the masses of Flight Sim X users that have been itching to find a way to make the game more… explosive.

Combat Pilot is an intriguing project, turning your existing Flight Sim X package into what is essentially a persistent world MMO, filled with like-minded wannabe top guns. You begin as a cadet, stationed in-game at NAS Whiting Field, Florida, undergoing a rigorous training program in which you have to clock up more than 40 hours of flight time. And since Combat Pilot uses Flight Sim X as a base engine, we’re not talking simple arcade-style flying here. This is full-on simulation and you’ll be training everything from basic take-offs and landings to authentic air-to-air or air-to-ground combat tactics.

Pass the training and you’ll move on to a career flying actual combat missions with and against other pilots, joining virtual squadrons, building relationships with actual wingmen (you can fight over who’s supporting who in a vaguely homoerotic manner in the chat forums) and progressing up through the ranks into a position of command.

Your career path can take you along air-to-air roles in F-14 Tomcats (the Tom Cruise Top Gun ones) or flying AV-8B Harrier Jump Jets (the British hovering ones that are always ‘bowing’ to minor dignitaries at flight shows). Air-to-ground careers put you in A-10 Warthogs, while carrier-based ops can see you flying F-18 Hornets. On top of that, some player squadrons will be flying their own aircraft which will require paying a fee to join in order to download the appropriate model.

This is one of the most ambitious extensions we’ve ever seen for Flight Sim X. Will it work? True, the membership fees look to be quite pricey to begin with (minimum of $49.99 plus an $11.99 monthly subscription), but it doesn’t seem to have put people off so far. In the game’s first twenty four hours there were already over seventy squadrons formed by players, each consisting of multiple flight wings and strict chains-of-command, with more arriving all the time.

We’ll take a more detailed look at Saitek Combat Pilot soon, but in the meantime get a taste of some of the early action with these ‘gun camera’ vids.