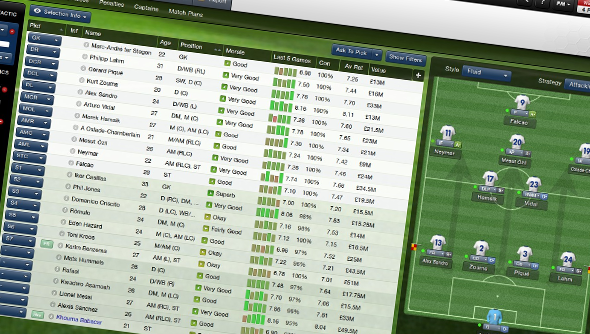 Football Manager may not be something you’d immediately expect to spawn a feature-length documentary but An Alternative Reality: The Football Manager Documentary is a thing and if you live in the UK then it may be coming to a Vue cinema near you.

The documentary charts the history of the famous football simulator and how it’s found fans around the world and influenced the sport itself.

On 7 October, for one night only, the film will be on show in 26 Vue cinemas around the UK.

“The documentary isn’t our story – it’s the story of the people who escape to the alternative reality of being a football manager, and the effect this has had on their lives,” Sports Interactive’s studio director, Miles Jacobson, told our reporter Prez Relice. “It’s also the story of how a computer game made by football fans has become a part of the world it set out to replicate. It’s not just for people who play – it’s also for people who’ve ever wondered why others spend so much time escaping into this world.”

On paper, that last bit seems a bit of an ask, why would anyone not interested in Football Manager want to watch a feature length documentary about it but there is something fascinating about the effect of that game. I’ve friends who play nothing else but that game and over years have sunk thousands of hours into it, playing their team far into the future till there are no real world players on the pitch. What’s so compelling about the game and the sport that keeps them hooked?

Vue wouldn’t let Relice leave till they’d had their say. the cinema chain’s marketing and sales director, Joanne Webb told Relice that “Football Manager has been an iconic small screen franchise for many years and we are delighted to be able to bring this unique documentary to the big screen. The film is another exciting event cinema experience that I’m sure our customers will really enjoy.”

Relice, freed from Webb’s grip ran to the PCGamesN news chopper to deliver us her report. On the way out she grabbed a document that turned out revealed plans for Jacobson to answer questions live after the film finishes screening. Anyone attending a screening can ask questions to him from their separate venues and see him answer them on the big screen, like he’s Big Brother in 1984.

You can find more details about the film and the screenings on the event’s website.