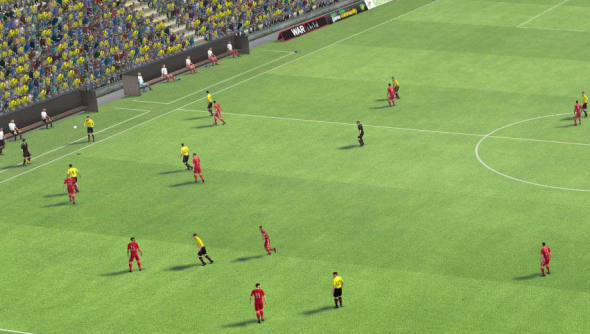 Cristiano Ronaldo is a freak, statistically speaking. “Ronaldo’s scored 14 goals in 8 games this season,” Sports Interactive studio director Miles Jacobson explains. “If that happened inside FM we would have people crying bug and calling the game every name under the sun.

“So, sometimes we have to balance differently from the real world.”

“If in testing they’re getting a goal a game that’s not a problem but if we were looking at testing and we were seeing 14 goals in 8 games, we’d be worried and we might fix something even though in real life it could happen.

“Players like Messi and Cristiano Ronaldo, even Adebayo Akinfenwa at AFC Wimbledon, are really difficult but they’re also the players we use for testing because if those players are underperforming we know there’s a problem.”

While Sports Interactive tone down star players’ ability, they introduce anomalies into their simulation through player morale.

“All the players have personalities that are driven by data,” Jacobson reveals. “Players don’t want to sit on the bench week in week out. They are going to get unhappy. That unhappiness can spread to the rest of the squad and sometimes that unhappiness can lose the manager his job, just as it can in real life.” Conversely, happy players can buoy the abilities of everyone in the team.

Jacobson insists there must be room for surprises. “Some players do think it should be more gamey and the AI should do the same thing every time but that’s boring. If the game was robotic it wouldn’t be a simulation.”

“I fully understand how frustrating it is for people when they’re dominating a game and then they lose 1-0 but it’s something that happens in football.

“That’s something that we will not stop.”