How many cores is too many cores? If CERN computing engineer Liviu Valsan is to be believed, AMD’s Zen-powered Opteron processors will run on almost three dozen of them. Giving a presentation on data centre trends, Valsan included a slide which reveals more about AMD’s upcoming new generation processors than we’ve been privvy to previously. Seriously though. 32 Cores.

The slide tells us a few things we already knew, and a few we didn’t: 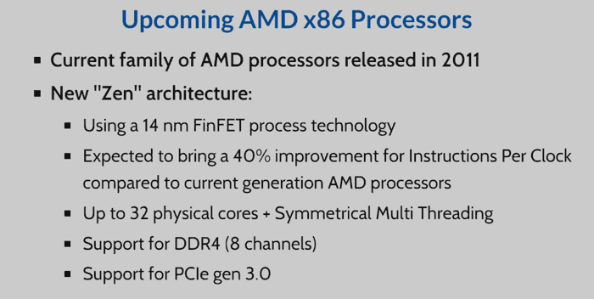 What we knew is that it’s build on the new remarkably small 14 nm FinFET manufacturing process, something of a landmark moment after both Intel and AMD appeared stuck on 28 nm for years. Like Intel’s latest Skylake CPUs, AMD’s Opteron processors will support DD4 memory.

What AMD hadn’t mentioned thus far though was that Opteron processors will feature up to 32 cores, and will support symmetrical multi-threading. The latter means that not only multiple threads can be processed simultaneously on one core, but also multiple tasks. Couple that tech with such a gargantuan core count, and AMD’s imminent new CPU generation looks poised to take on Intel in the high-end server tech fight with their Opteron processors, and elsewhere in gaming CPUs with new Zen-based models.

Speaking of gaming CPUs, it’s extremely unlikely that we’ll see anything carrying 32 cores in our market. It’s more likely that AMD will be offering 4, 6, or 8-core chips for gaming. Still, it’d be nice to see what 64 threads could do to a game of Football Manager running all leagues in max detail, wouldn’t it?