Football Manager 2016 is out today, and as per tradition, those who pre-ordered have had access to the beta for the past couple of weeks. Here’s the problem the game faces every year at around this time, studio director Miles Jacobson tells me: “People who play Football Manager are not necessarily people who play a lot of other games. [Our beta’s] not like a beta for an FPS that’s only going to really hardcore gamers, so some of our people just treat it as being able to play the game early.” Sometimes that beta’s polished enough to preserve that illusion, and sometimes – as with Football Manager 2015 – it isn’t.

Like your gaming experiences deep like an ocean? Cast an eye over our best PC simulation games.

It’s “fine,” Jacobson says, for people to play the beta with those expectations, but he also indicates the pressure of each beta as a barometer for the final game’s quality has fundamentally changed the way the studio operates: “Last year there were a lot of issues still in the beta, and there were too many issues at launch too. This year we’ve changed the production practices once again, which is difficult for a company that’s been going for 22 years, but we wanted to have a much more polished game this year.”

When Football Manager 2016’s beta was released to pre-order customers two weeks before the game’s final release date, it had “less open issues than when we released the [FM2015] Christmas patch last year,” says Jacobson. “I’m probably being too honest for my own good here.”

Releasing an ultra-polished beta isn’t a task many developers would concern themselves with, but the normal rules don’t apply to Football Manager. Firstly, you can carry over your progress in the beta to the final version, and that proliferates the idea that you’re just getting to play the game early. 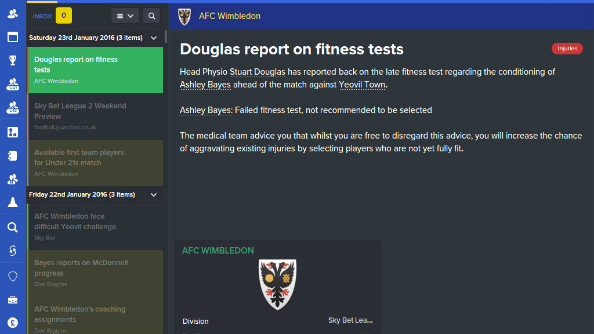 Secondly, Football Manager 2015’s rocky launch did damage. Post-release patches brought the standard of play up to the level expected by its fanbase in the following months, but the Metascore of 80 – low by FM’s standards – tells the story of its initially tepid reception. “The idea for launch” this time, says Jacobson simply, “is to have as bug free a game as possible.”

Reception to this year’s beta has been much more positive than it was a year ago, he says, so Sports Interactive’s plan appears to be working. Of course, the beta period isn’t just an indicator of the final release’s stability, it’s a crucial instrument in creating it. I ask Jacobson what the team were looking out for specifically in this year’s beta, and what they can realistically fix before the game ships.

“We’re looking for crashes, we’re looking for oddities in the match engine, we’re looking for technical issues. Literally anything that comes in, everyone here is still working… Gone are the days now when you go gold a month before release on PC, because the disk gets manufactured with data on it. Our disk doesn’t even have an executable file on it, that gets downloaded when you buy the game.” That means the team’s able to keep polishing right up to zero hour. “Last year, we declared everything done about 12 hours before we actually released, this year seems to be a little bit calmer, which is good.” 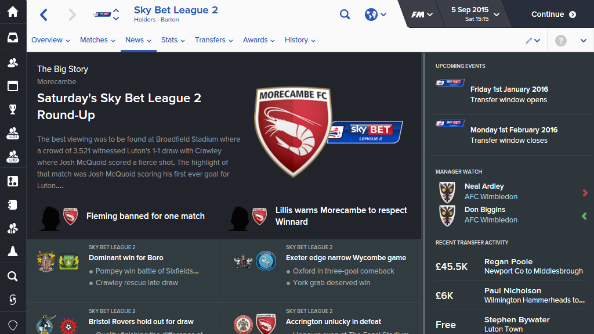 One particular issue the team caught during beta testing caused goalkeepers to occasionally face the wrong way and refuse to take goal kicks, while an entire stadium of players, staff, and fans patiently waited for upwards of half an hour, he tells me. Bugs will be bugs, but it’s nice when they at least introduce an element of levity to proceedings, isn’t it?

The reasons for Sports Interactive changing their production practices are clear; the methods less so. I ask Jacobson for the specifics. “One of the things we did is that when we were going through the new features stage,” he says, “people just concentrated on features, and then they fixed the bugs. That can harm things, because if there’s a problem with the new feature, it can have knock-on effects on other areas of the game and can ruin a lot of the QA.

“So we’ve been doing a lot more bug fixing as we’ve been going along, and then making time for the coders if they’ve had historical issues. So a lot of very minor historical issues have been fixed this year, which is effectively one of the things that adds to the polish of what we’re doing.”

More than simply a PR recovery job to assuage any seeds of doubt sewed by last year’s less-than-perfect launch, SI’s renewed focus on day one polish appears to be a point of pride in an industry drifting gradually away from that principle. As it’s become easier for developers to patch their games on console platforms, they’re beginning to mirror the practices of PC devs. In short: polished launches are no longer de rigueur, and scruffy launches increasingly tolerated. 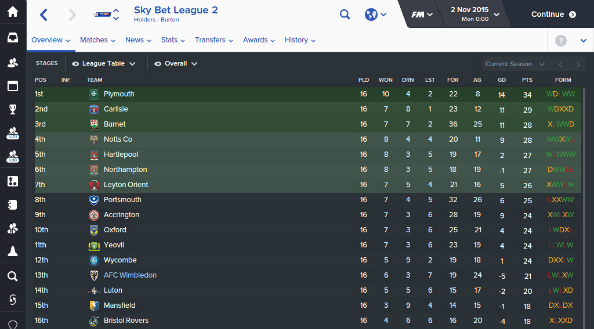 “A lot of [console] devs have fallen into a similar trap as us PC devs have had for a while,” says Jacobson, “whereby the games aren’t as polished as they want for launch because they think they can just patch it, but at the end of day that’s actually the wrong attitude.

“I think we and many other PC devs have got a reputation for their games being very good, but not being polished until a few months after release. I don’t actually think that that’s fair for the people playing the game. They should be getting the best experience they possibly can from launch.”

That doesn’t mean SI won’t be rolling out post-release patches, he assures – just that those patches will squash smaller bugs when they do arrive. And, lest we forget, there’s more to this year’s iteration than cleaner code. Among several significant additions to the life-corroding formula is the Fantasy Draft. It’s a familiar concept to anyone who’s fooled around with U.S. sports games during the brief lulls in which FM allows such deviation: create a custom team and take turns picking players with others online, then compete in a mini-league together. The interesting thing about it finding its way into a FM game though is that it offers something approaching short-form multiplayer fun.

“This is our nod to e-sports really” says Jacobson. “Everyone starts on an even playing field. You can have six-player up to 32-player cup competitions all starting from draft, and the draft you do is much like what Fantasy League used to be.”

Fantasy League wasn’t the quickest way to divvy out players though, he concedes. Fantasy Draft is designed to maintain a pace capable of holding every participant’s attention span. Frankly, that’s always been the battle any multiplayer element of Football Manager has faced. 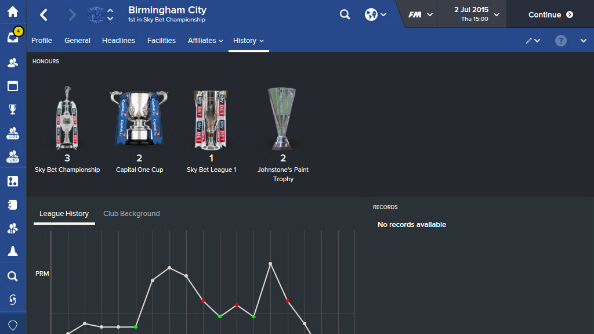 Other big-hitters on this year’s feature list are integrated match statistics from Prozone, a revamped set-piece creator, expanded press interaction, and this year’s most playful flourish: ‘Manager on the Touchline.’ You’re now able to customise a virtual gaffer and watch his spirited pacing and gesticulating with a level of detail that’s new to the series – but does having the game visualise details that previously required you to engage your imagination break the FM spell? Not a bit, says Jacobson.

“You make your own character who then appears in game, so it’s still you. Hopefully the imagination is still there. I certainly haven’t found myself thinking about the game less because I’ve got a graphical version [of myself]. It’s been one our most requested features on the forums, to have the manager standing there on the touchline, getting angry when things are going wrong.”

SI’s relationship with publisher Sega meant they could make use of Creative Assembly’s mo-cap space, adding new animations for those managers whose teams are following instructions to the letter, and those doomed to suffer the ritual humiliation of a home loss to the likes of Stockport County, week in, week out. 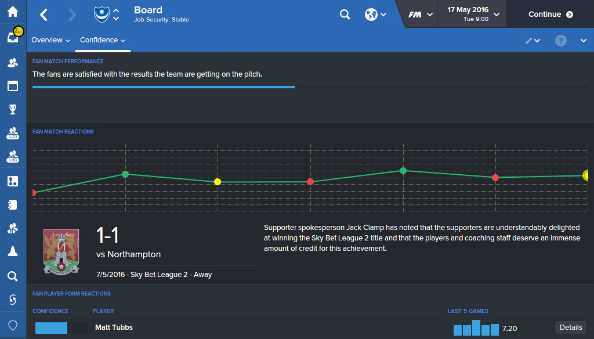 I can’t conclude the interview wihtout asking Jacobson about his unusually candid approach to Twitter fan feedback. Anyone who follows him has witnessed the apparently constant tide of suggestions, criticisms, and occasionally outright abuse, that he fields on a daily basis. Its not unusual for someone associated with game development to face this kind of interaction online, of course – what’s unusual is how human and honest Jacobson is in his responses.

“My rules are clear,” he says. “If someone’s polite to me, I’m going to be polite back, if someone’s an arsehole to me, I’m going to be an arsehole back because I’m human.” The latter approach, he tells me, does get him into trouble at times, but from the bystander’s perspective it’s incredibly refreshing to see a game creator standing up for themself, upparently unafraid of the PR repercussions.

“To be honest, those voices are around one per cent. I really care about the other 99% of people, so I reply to everyone that tweets me so long as they’re polite. Even if I disagree with their point of view I’ll still reply to them, debate with them. I think it’s an essential tool all creators and developers should use – they leave it to someone else to deal with, but getting that direct feedback is so important to what I try to do as someone who directs a game, and we are set up in quite a weird way at SI.

“The Twitter side of things is ideal because we don’t have a team of designers, we have me as a director and we have a lot of programmers who are also designers, working on stuff, so it works well and I hope it doesn’t get to the stage where I have to stop, because I really like having that direct communication with the people who play the game. Because, at the end of the day, without all those people collectively, we don’t get to make the game anymore.”