Creating a successful annual franchise that meaningfully adds to the experience found in previous versions of a game is pretty darn hard. The pressure of developing a game, realistically, within a nine month window that resolves the faults of what came before and refreshes the formula meaningfully is challenging and we all know it.

For the most part though, the Football Manager series has avoided the pitfalls surrounding the commitment to release a game every year. New additions to the series like Fantasy Draft mode, rejigged tactical screens and player roles have helped the premier football management series to feel fresh over two decades after its first emergence as Championship Manager.

But Football Manager 2017 represents a disappointing end to that good run. Although it improves on Football Manager 2016, it fails to do so in a way that points to clear progress. Missing a beat on its new features and not offering more than a handy polish to the core experience, it’s the first game in years where it’d be hard to recommend casual fans to pay full price for it up front. 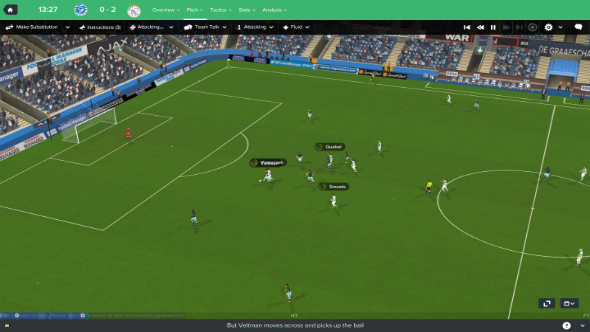 This isn’t because Football Manager 2017 isn’t a good game – far from it. For what it’s worth, it’s actually a great game and it probably provides the most convincing experience of pretending to be a manager of a football club… well, ever.

It builds upon the formula familiar to fans of the game across the world. You start the game as a manager of a football team or an unemployed manager looking for a role. You then take over at a club and attempt to guide it to glory by building a team of player in the transfer market, coaching them up and sending them out in the best tactical shape to win matches.

At its heart then, Football Manager has always been a simple game. But the complexity of its engine, the enormously accurate database of players and clubs it contains and the sheer appeal of football means it has a dedicated fan base of hardcore players who love the series.

For them, Football Manager 2017 offers a number of improvements that will make the experience better than ever. And for the most part, those improvements can be found in the way players interact with the game through their virtual inbox and in game menus.

As plenty of people will be aware, Football Manager has always had a bit of a reputation as being a game for people who love manipulating spreadsheets more than they like manipulating a football. This data driven approach has always made sense within the context of the way the game is made, but its complexity has undoubtedly driven casual players away from the riches at hand.

So it is pleasing to see that Sports Interactive have attempted to handle this problem in three interesting ways.

In last year’s version of the game, staff would provide you with intensive reports on how your team was doing and where it could improve. But as these tended to be written in text form, it was too easy to simply scan over useful feedback and ignore it. 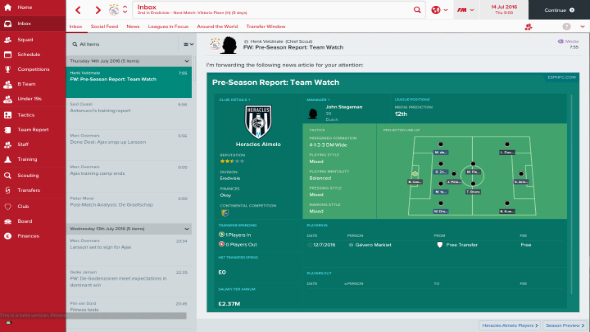 Now, increasingly visual reports provide you with the means to really see how your team (or an opponent’s team) is doing.

Pre- and post-match reports feature heat diagrams which show where most of your play took place. Injury reports feature big crosses or ticks to quickly show you whether a player is fit. And opposition reports show a small formation diagram alongside key numbers to give you an idea on the shape you’re about to face. They’re small changes, but they make it significantly easier to see what you’re doing and help you to make decisions without opening Excel first.

Second, the game is much better at surfacing information to the manager than its predecessors. Partly, and following on from the point above, it’s about providing more stats to the player in the eyeline of their inbox.

Rather than hiding analytical data behind the scenes and forcing players to negotiate myriad menus to get to it, a much larger quantity of information about match stats, player performance and coaching advice is put in front of you. This means you can use that as a starting point for deeper research, helping you to diagnose problems with your team.

More importantly though, the game has also started to pull back the curtain on the match engine itself. While plenty of experienced players understand how the match engine is constructed and what that means tactically, newer players have been thrown under the bus for the past few years because of the lack of in-game assistance.

Football Manager 2017 begins to correct that. Alongside coaching and tactical reports about the performance of your team is advice on how to translate what is best for to do into the match engine. Staff advice, for example, now recommends the number of defend, support or attack duties needed to fit a certain mentality. This means that players who are fresh to the series have a better understanding of the building blocks of tactical creation, without providing them so much information that they feel like their hands are being held. 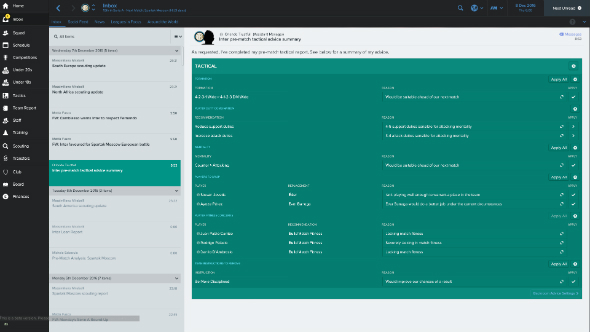 Finally, on a menu front, the way you interact with data in the game has been changed for the better. While you were previously handed advice from your staff and were able to act on it, you often had to open emails, respond to advice, negotiate to a player screen and complete an action. It was, to be frank, a little tedious at times and always felt like it could be sped up.

In this year’s version, you can simply tick a box in an email or click a link straight through to a relevant page to complete an action recommended by a coach. This speeds up the flow of the game /and/ makes you feel like a boss man firing off instructions to your assembled staff, so it’s a definite double-win.

Beyond the incredibly exciting world of menus (*cough*), there is a welcome improvement to the match engine as well that players will appreciate.

The most obvious improvement is a visual one. For the first time ever, Football Manager actually looks alright as a football game. It, of course, remains streets behind the likes of FIFA or Pro Evolution Soccer as far as graphics go, but Sports Interactive’s new partnership with Creative Assembly appears to be bearing visual fruit at least.

Player avatars and animations look more convincing than they’ve ever done before. Stadia look populated and busy, creating a sense of atmosphere that the animated side of the game has lacked before. And little visual extras like the pre-match handshake, new camera angles and even the addition of vanishing spray add texture to the graphics. 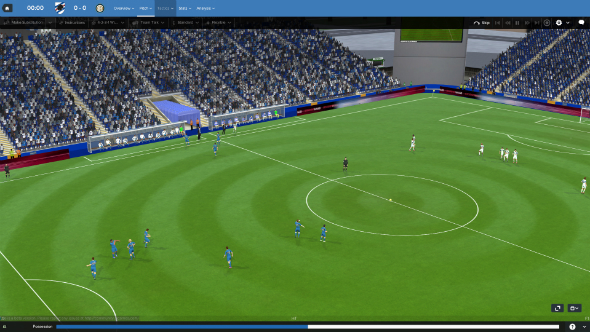 Furthermore, there have been a few handy changes to the game engine that improve the match day experience too. The big hallelujah moment for Football Manager 2016 players will be realising that crosses are no longer the equivalent of an in-game cheat code, meaning that Football Manager 2017 feels more balanced than its predecessor from a tactical perspective.

And there are extra tweaks that make the match engine feel as if it has been fine tuned as well. Player AI seems to be a bit better, which means there are fewer times where a defender shanks a ball out of play for a corner, wingers choose stupidly to shoot and strikers get caught offside. This means that when a player does do any of those things, you really can question whether he’s a complete turnip.

Meanwhile, manager AI is more reactive than it has ever been before. Instead of twiddling its thumbs while you make tactical changes that affect the shape of the game, computer opponents will actively go after you if you try to pull a fast one on them.

For example, I was having a terrible run of form with my Inter Milan team ahead of a league match against Roma. So I came up with this weird lopsided 4-3-1-2 formation that helped me to nab a 1-0 lead before half time. Unfazed by my weirdness, they lined up in the second half with a 4-2-4-0 and went on to get an equaliser and nab a point – proving that the AI does have the ability to go toe-to-toe with footballing mad men. 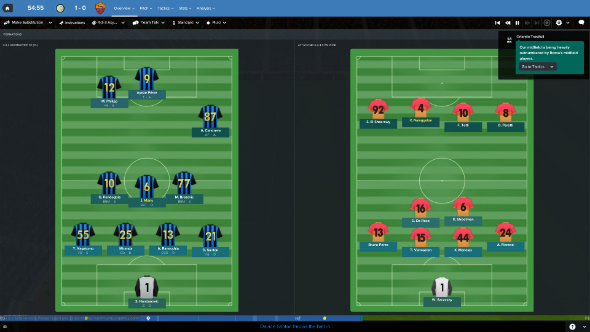 But while these changes are nice, it’s hard to escape the feeling that they’re all a bit inconsequential. Although broadly they do help Football Manager 2017 to be a better game than its forerunners, they also feel like the sort of improvements you’d expect in an annual franchise. While tweaks to the engine, shifts to the UI and some shiny new graphics are nice, the overall impression the game has given me is that I’m playing Football Manager 2016 Plus rather than a new entry in the series.

This was compounded by the general ineffectiveness of the new in-game features. Despite much fanfare in a half-hour features video about the new things supposedly included in Football Manager 2017, the major new additions to the game each fall flat for different reasons.

First, the addition of data analysts and sports scientists don’t fully work because they don’t fit into the existing framework of the game.

While you do need to hire them to get analytical match reports and to improve the quality of your medical team, they’re the only job roles that lack in-game filters to help you identify their skill. As a result, you’re hiring them blindly in comparison to, say, a scout who you know will need to be able to judge player ability, potential and be determined to succeed. 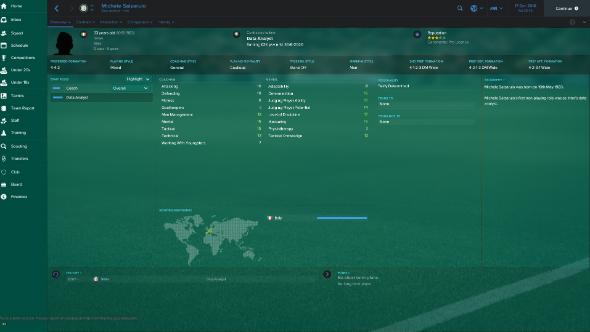 Second, the addition of greater customisation for your managerial avatar comes across as nothing more than a nice cosmetic addition. Yes, it is fun to dress up your manager in a silly outfit and add your face (or the face of a famous celebrity) into the game. But aside from when they’re standing on the touchline or gawping at you from the menu screen, it doesn’t add anything to the game at all.

Third, it’s this failure to add anything to the game at all that dooms Football Manager 2017’s much-vaunted social media feature. Touted as an addition to the news feed, the social feed is meant to provide an alternative method of feedback to help you gauge your managerial performance.

What it actually provides is a predictable stream of generic tweets that range from happy to sad on everything that happens to you in the game. Not only doesn’t it add anything to the game, its inclusion in the screen flow actually disrupts the increased speed brought about by menu redesigns. That’s the principle reason why I turned it off at the first opportunity, something I recommend to most players when they boot up. 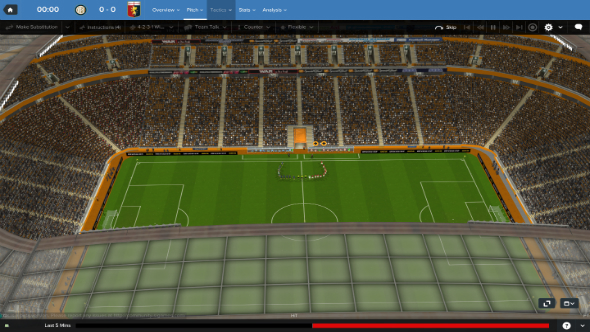 It all combines to give the feeling that the series has only shuffled forward, and makes it tough to recommend Football Manager 2017 to anyone but the diehards at launch. For those of you who, like me, have played the series for thousands of hours over the year, it’s a day one purchase. It is a better game than last year’s, it has up to date stats, and it will offer you the same value it has always done.

While games like Civilisation 6 and Battlefield 1 are taking familiar gaming formulas and remixing them, Football Manager 2017 feels a little bit half-hearted in comparison. And that means it’s probably worth waiting for a sale to bring it down to a price tag that suits its relatively limited progress forward.