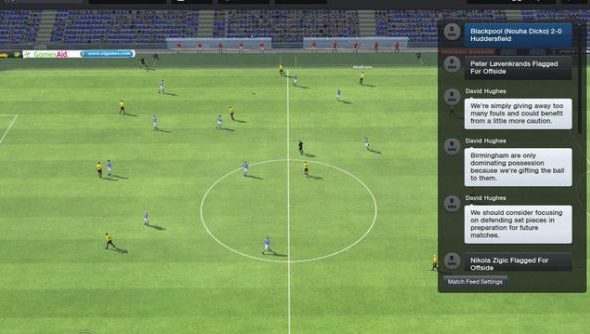 Football Manager 2014 is coming to Linux! Hooray! And that’s in the properly interconnected, Steam-enabled sense of the phrase.

“People are trying to get their heads around this a little bit,” Sports Interactive’s Miles Jacobson told PCGN. “That if you buy the Linux version, if you have a Linux desktop at home, a Windows laptop and a Mac at work, you buy it once, and you can upload your save game to the cloud to be able to just carry on your save game wherever you are.”

There’s still one place Football Manager isn’t, though: Windows RT. And there’s a very good reason for that.

Football Manager is available in adapted form for both iOS and Android – so why haven’t SI touched the Windows 8 App Store?

“Apple, when they came along and were doing phones and tablets and Google with Android, they disrupted the market in a very positive way,” said Jacobson. “But they kept the ecosystem separate; so the Mac ecosystem is different from the iPad and iPhone ecosystem.”

Microsoft decided to go in another direction, however: they merged their PC ecosystems with their mobile platform, Windows RT. The resulting gluey mess created problems for SI and their players.

SI decided to give Windows RT a clear berth as a result – and their current sales figures suggest they made the right choice.

“I don’t hear of any developers doing particularly well on Windows RT and the day that Microsoft separate the two off is the day that I’ll be really happy because I think it was disruption that just wasn’t needed, and my personal opinion is that it was negative disruption,” added Jacobson.

“But who am I to sit here and say that when you’ve got Microsoft; this huge, multi-billion dollar company who are obviously incredibly successful at what they do and I’m a tiny little speck with what we do with our games here? So… like many the feedback was given and they stuck with the route that they went.

“If I knew Microsoft this year – with all the changes they’ve made to Xbox – were the same Microsoft as last year, then maybe we’d be on those platforms,” he concluded. “But at the moment we don’t have any plans to go to Windows Mobile or Windows RT, no plans to support it at all.”