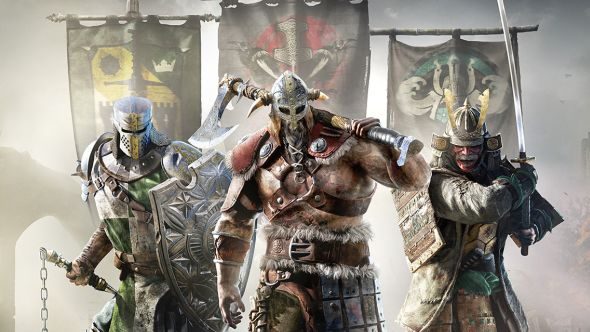 For Honor brings sword-slashing, head-mashing and katana-wielding military might to PC today with the start of the beta. While it’s not fully open, there are a lot more codes out there for it than have been available previously, and all NDAs are removed. Here’s the key facts you’re after.

What else is there to look forward to? Here’s all the upcoming PC games on the way.

When does the For Honor beta start and end?

Emails went out to anyone who received a beta key saying that the For Honor beta will start at 3pm CET / 2pm GMT / 6am PST today, January 26, ending in the early hours of Jan 30. Here’s the full details for each major time zone:

In other words, you’ve got Friday, Saturday and Sunday to enjoy it in whatever time zone you’re in.

How do I get into the For Honor beta?

Sadly, it’s not as simple as just a download. Keys have been distributed to a few folks via Ubisoft’s official sign-up, and each of those people can invite three uPlay friends – check with your mates, or on Reddit, NeoGAF or the official forums. Smaller communities you’re part of might also have their own sharing thread, and are more likely to have spares too.

There’s also the SCARS website that Ubisoft advertised last week. For a while it was giving guaranteed beta access for anyone who went through its full process. However, anyone who gets to the end of the site now is reporting no code pops up, or the option to redeem it. There’s an FAQ entry saying it has ran out. For now, it seems to be a dead route.

Obviously, make sure you’re signed up for a code in case Ubisoft decide to do some more releases through the weekend.

What’s in the For Honor beta?

According to the For Honor beta trailer above, here’s what you’ll get to play with:

Can I run the For Honor beta? What are the system requirements?

We’ve got a full post about the For Honor system requirements for you to look at. In general, it should run on any reasonable (or unreasonable) machine, but do remember it’s a beta and may still have some optimization work to do.

Will my progress in the For Honor beta transfer to the live game?

Unsurprisingly, no. You being better at the game definitely will, though, so train up them skills.

Help! The For Honor beta is crashing, buggy or I’m bad at it

While you’ll need to check our upcoming guide for the latter, the first two are sort’ve the point. Ubisoft are working out the creases in their grand plan (to control all the water). That said, here’s some quick fixes:

Hopefully that helps with some amount of the problems you’re facing. As for getting good, have you tried picking the Nobushi?

That’s it, go play, or wait for the For Honor release date on February 14 – say you love them with an axe.