For Honor has not even been out for a year and is already entering its fourth season. In that time, we have seen new combatants enter the fray, we have fought across fresh arenas, and there have even been some new modes added. Despite all these additions, For Honor is best when at its most pure: in its one-on-one duels. It is there where you will find its namesake, that fight for correctly-spelled honour – at least when you are not dumping someone unceremoniously from a high place.

Test yourself against your friends with our list of the best multiplayer PC games.

Battles get hectic when there are more than two people battering each other with metal blades in For Honor. You will be stabbed in the back, you will be ganged up on, and it will not feel very honourable at all. It becomes a more hectic, less precise affair when there are more people involved, as I am sure real war would when everyone is trying to decapitate each other with sharpened steel. Ubisoft also saw fit to add layers of complexity when more players are involved, introducing bear traps, volleys of arrows, molotov cocktails, and more replenishing abilities to your arsenal. But more is not always better.

This is still true of Tribute, the new capture the flag-esque 4v4 mode introduced in Season Four. In it, each team fights over three offerings to the gods. Once you pick one up, you leg it back to your base – trying not to get hit on the way, since you will drop it – before planting it at an altar. The idea is to get all three back to your base and then stop the enemy team from stealing them. There is fun to be found here, but it is just a twist on capture the flag – nothing you have not seen before. It also has all the same problems as For Honor’s other big game modes, meaning you will still miss the purity of those one-on-one scraps, when it is just you and an opponent trying to outsmart each other. 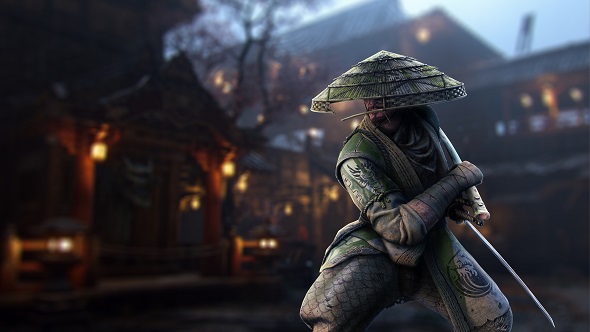 Elsewhere, Season Four offers up two new heroes. The first is the Aramusha for the Samurai; a dual-wielding ronin who looks like Raiden on a round of roids. He is a slow, methodical fighter who can do big damage with his twin blades, particularly from his overhead swing. He is also capable of guarding from every direction with a well-timed rotation of the right stick, meaning those with good reflexes can essentially block anything without guessing a direction. This technical stabber is best for those who like to counter-attack.

Another addition, the Shaman, is a brutal assassin who fights for the Vikings. This nippy fighter is equipped with an axe and a dagger. Being an assassin, you need to time your blocks, but she is one of the fastest, most relentless attackers in the game. It is easy to get in the middle of a fight and score a big combo, occasionally triggering a brutal rage when she sees blood, allowing you to carry on attacking when normally she would be exhausted. She can also pin folk down and bite their necks. Perfect for those without honour.

The two new fighters are a great addition to Ubisoft’s brilliant brawler. It will be interesting to see how they shake up the meta in the season to come. From my first impressions, the Shaman will leave a bigger mark – right on your neck – in the coming months. However, as unfortunate as it may be, I can only see new mode Tribute slipping into obscurity – dumped off a cliff like so many Samurai.