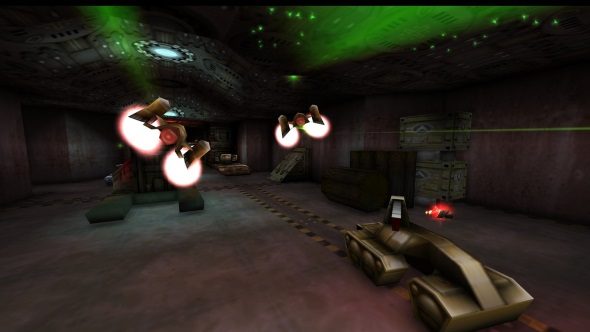 2017 was a fine year for the retro FPS genre, and 2018 is already off to a strong start. Among a slew of exciting titles due for release over the next few months (including Quake-meets-Blood mashup Dusk and Descent reprisal Overload), it seems that Samuel ‘Kaiser’ Villarreal, the coding brain behind Nightdive’s Turok updates and many others has been working on something pretty exciting.

First released in 1998 and accompanied by a bafflingly non-sequitur ad campaign, Forsaken was an early 3D-accelerated take on the Descent ‘6 Degrees of Freedom’ FPS genre with a faster, more arcadey twist, and now it’s coming back.

Kaiser and his EX series of ports prove that classic games don’t die. They just need a little spit n’ polish and they’re good as new. Here’s some other PC classics, many of which have their own modern modding and porting scenes.

You can see the first few screenshots of Forsaken EX here on Twitter, direct from the developer. For those who haven’t played it, it’s a lot like seminal 6DOF shooter Descent, although faster and louder and with a hell of a lot more coloured lighting, showing off the early 3D acceleration tech of the era.

Playing as a variety of high-tech bounty hunters riding heavily armed and armored hoverbikes, you blasted through tunnels, exploded robot tanks, occasionally duelled a rival in a deathmatch-like battle and frequently had to navigate your way out of a tight spot when the self destruct mechanism started counting down on the level you’re in. It was good stuff, and the deathmatch – if you ever got to play it via LAN – was intense, lurid fun.

Probably the most exciting aspect of Forsaken EX is that it’s not going to be a straight port. The PC, Playstation and N64 versions of the game each had their own quirks, and in the case of the N64 version, wildly different content in some parts, such as some all-new bosses. Not happy to let console gamers of yesteryear hog all the glory, Forsaken EX is going to be integrating much of the ‘lost’ N64 content back into the PC version, adapted and remixed to fit the faster, twitchier PC edition’s gameplay.

While publishing details haven’t been confirmed yet, Nightdive Studios have tweeted about the project as well, suggesting that once it’s ready for prime-time, they’ll be helping get it onto Steam and well promoted. Some of Kaiser’s other works include the Turok 1 and 2 ports on Steam, an update of Strife (not to be confused with the much later MOBA), and an unofficial port of the excellent and little-known Doom 64 to PC.

There were also plans for Nightdive to publish a port of the even more obscure PSX/Sega Saturn versions of old FPS Powerslave/Exhumed, but they fell through due to legal disputes. Fortunately, a 99% complete prototype build is known to have leaked out at some point, if you don’t mind doing a little digging.