The second season of Fornite: Battle Royale is nearly over, which means it’s time to prepare for season three. With that in mind, Epic have revealed details for the next season, and it looks like you’ll be heading to the stars.

Here are some Fortnite tips and tricks to help you secure that Victory Royale.

Each season’s battle pass is themed, and based on Epic’s announcement, it looks as though season three will be space-themed. The image above shows a space-bound battle bus, with two space-suit clad characters diving towards the island.

If you’ve not yet experienced the battle pass, it’s a way to get exclusive loot just by playing Battle Royale. When you buy, you’ll instantly unlock a bunch of rewards, and as you play you’ll unlock more through a series of different reward tiers. The medieval-themed season two pass contained 70 reward tiers, but Epic have upped their game for season three, capping your rewards at 100 tiers. That’ll include six new outfits, three pickaxes, three new gliders, and more, as detailed below. 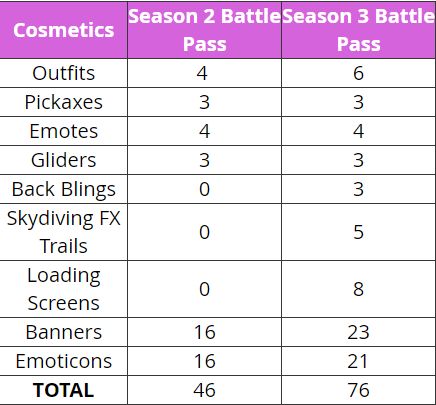 Despite the extra tiers, Epic say you’ll be able to unlock everything the pass has to offer in roughly the same amount of time, which they reckon is somewhere between 75-150 hours. If you want a head-start, however, you can buy the new Battle Bundle, which includes the pass but instantly unlocks the first 25 reward tiers, all for a discount of 40%.

You can get a better look at the breakdown of all the rewards on offer here, as well as more information about weekly challenges, and an FAQ.