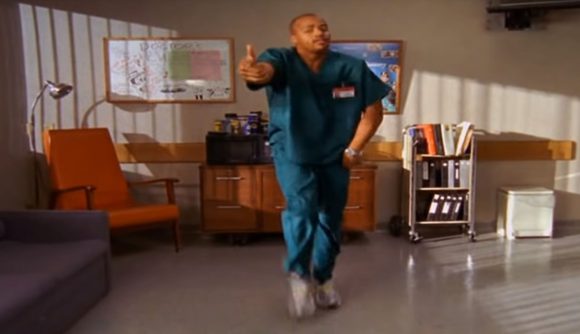 Donald Faison, the actor who played Chris Turk on the (brilliant) medical sitcom Scrubs, says that Epic Games “jacked” a dance he created for the show, and claims he hasn’t been paid for it. His comments follow similar complaints by hip-hop artists such as 2 Milly and Chance the Rapper, whose moves have also made their way into the game.

Faison was speaking at a Scrubs cast reunion at the Vulture Festival this past weekend, which you can watch below. When the hostess asks about the dance, Faison is – inevitably – called on to perform it. He says:

“If you wanna see it, you can play Fortnite, because they jacked that shit.”

Interestingly, executive producer Bill Lawrence says “Fortnite had to enquire for the legal… for the legality of it, and it’s fine because it’s just a character dancing,” at which point Faison cuts right to the heart of the matter:

“I don’t get no money. That’s what y’all are thinking, right? Somebody got paid? No. No. I did not. Somebody stole that shit, and it’s not mine any more.”

A little gentle mockery follows, with Lawrence and Zach Braff – who played the show’s protagonist, John Dorian – suggesting that money was received and spent by everyone else in the cast except Faison. It appears, however, that mockery is all this is: “That’s not true,” says Faison. “Nobody got money for it.”

There’s no question that the dance was copied, literally move-for-move, as this comparison video shows (thanks to A_Rival Planetskill on YouTube):

The panel continues to discuss the dance’s origins. Apparently, Faison was late that day, hadn’t practised a dance (or even read the script), and made the whole thing up on the spot. In Lawrence’s words:

“When they played the song you could see him registering – ’cause he had no idea what the song was gonna be, even though it was in the script – he’s like ‘oh, Poison! I got that.'”

Faison joins Snoop Dogg, 2 Milly, and others in having had their moves appear in Fortnite. In Faison’s case, the ‘Poison’ dance is Fortnite’s default dance move (which always struck me as unwise, because why would you want to use any other dance?), so it’s especially prolific, but it’s also free – in a free-to-play game. Other dances are sold to players for real money, so Epic Games is profiting from them more directly.

According to an intellectual property lawyer in this breakdown video from Insider, the US Copyright Office doesn’t grant copyright for individual dance moves – they’re treated more like words or phrases, and copyrighting them could infringe on other choreographers’ creative expression. Given that monetising dance moves in this direct way is such a recent phenomenon, the law may have some catching up to do.