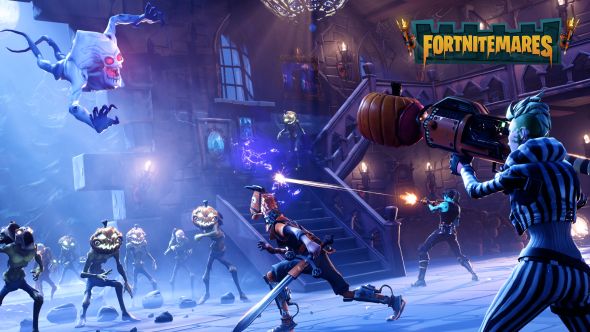 Fortnite gets a new patch today, bringing its ‘Fortnitemares’ Halloween event to a close and adding new leaderboards and a smoke grenade to its popular Battle Royale mode.

A global leaderboard now lists the top 50 players in the world for each match type, measured by wins, while another will list all players by score (that is, the amount of total experience gained). The smoke grenade works as you’d expect, obscuring vision with a white cloud.

As is tradition in a patch, there are bug fixes, balance changes, and a bit of a UI refresh. Notably, the rocket launcher now supports rocket riding, due to “overwhelming player demand” – if you missed this, it’s exactly what it sounds like. Players found they could literally ride the projectiles fired by the pumpkin launcher that replaced the rocket launcher during Fortnitemares, and hilarity ensued. Now you can ride rockets all year round.

Over in Save the World, Fortnite’s original co-op PvE mode, mutant storms are making a return, and nine new weapons by high-tech gunsmiths Vindertech are also being added.Here are the patch notes in full from Epic.