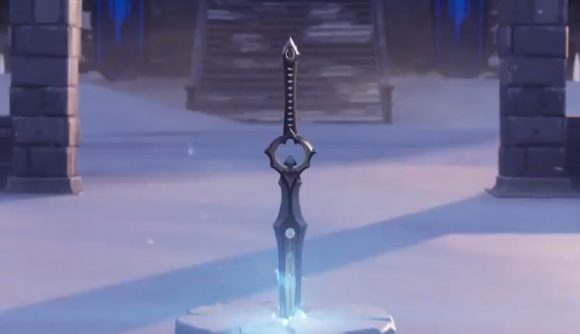 Epic brought the Infinity Blade to Fortnite today. It works a lot like the Infinity Gauntlet that came to the game along with the Avengers crossover, granting the player who picks it up incredible powers and challenging others to work together and take that lone powerhouse down. But the Gauntlet was part of an LTM – the Infinity Blade is part of the standard battle royale rulest, and it went live just ahead of the finals of a $1 million USD tournament.

A single sword spawns at the start of a match. It regenerates your health and shields, gives you double movement speed, and gives you a 75 damage attack that destroys structures instantly. On top of that, the alternate fire lets you perform a massive leap with a big batch of AoE damage.

The sword went live just this morning, giving players in today’s NA Winter Royale finals minimal time to prepare for its inclusion. Pros quickly picked up on the Infinity Blade’s overpowered nature, and early game skirmishes turned into brawls for the weapon. Psalm picked it up and offered the world an especially ridiculous display – in the the Twitter video below, you can see him pick up seven kills in under a minute.

Psalm closed the first heat of the tournament with 17 points – a decisive, seemingly insurmountable lead. In a post-match interview on the stream, Psalm suggested that it’s possible to outplay the sword, it’s just that other players haven’t gotten used to it yet. (Though with only a handful of hours to prepare, it’s unclear how they could’ve.)

On Twitter, though, Psalm was much more conciliatory. “Sorry guys,” he tweets, “I just had to show everyone how silly the sword is.” He says it “would look really really bad” to complain about the game’s state in a post-match interview. In a response to another pro, Psalm says “I feel really bad to the guys i killed, but someone’s gotta show just how disruptive this thing is… I literally broke like 5000+ worth of mats in the moving circles just endgame.”

Epic hasn’t yet issued a statement on the Infinity Blade, aside from a list of known bugs on Reddit. A number of pro players have expressed a loss in confidence toward Epic after the launch of such a game-altering update immediately before the tournament.

Can't believe I put my full time into fortnite and they pull 2 updates before a major tournament. Huge loss of respect for @FortniteGame IDC what I've made in the past, a fucking sword, airplanes that dont shoot eachother and target players without them.

The publisher has put a lot of money into Fortnite esports, but it’s going to take more than cash to keep the competitive scene healthy. Heat 2 is coming up shortly, and the finals will conclude tomorrow – we’ll see how the Infinity Blade is going to be addressed very soon.