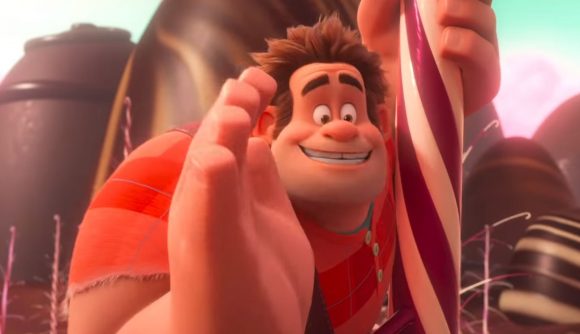 Disney’s Wreck-It Ralph has been spotted in Fortnite Battle Royale, leading players to wonder whether the character will make it into the game as part of a marketing tie-in for the upcoming film, which opened in the United States on the same day as the character first appeared.

Wreck-It Ralph first appeared in the 2012 film of the same name, as a destructive character from an arcade game who escapes his console and heads off around the internet. The new film, Ralph Breaks the Internet, sees the character head off on another tour of pop culture, so it’s not too surprising that Fortnite – arguably one of the biggest cultural phenomena of the year – would look for a tie-in.

Ralph was first spotted by streamer MozzzyyTwitch in a clip posted to Reddit. In that clip, which you can check out further down this article, Mozzzyy is looting in Risky Reels when he passes the enormous screen towards the south of the location. As he looks away, Ralph appears for a moment, waving at the screen before disappearing.

What exactly this means isn’t yet sure. It could just be a little easter egg with a relevant moment in the film itself, but personally, I think we’ll be seeing some more of Ralph in game at some point soon. It wouldn’t be the first time that Epic and Disney have worked together. Avengers: Infinity War’s Thanos has already shown up in the battle royale, and neither his model nor some of his abilities are a million miles away from what Ralph could have to offer.

Wreck It RALPH – Coming to Fortnite! from r/FortNiteBR

There’s not been any official announcement yet, but I’d imagine that given Fortnite’s rapid update schedule, whatever Ralph-related thing is about to happen will arrive pretty soon. Until then, you’ll need to look for Fortnite Carnival Clown Boards locations to help you complete your Battle Pass.

Ralph Breaks the Internet is in theatres in the United States now, and will release in the UK next Friday, November 30.